COVER PHOTO: The Augusta Lady Elks keep their eye on the ball during Saturday night's game against the Power Pirates. 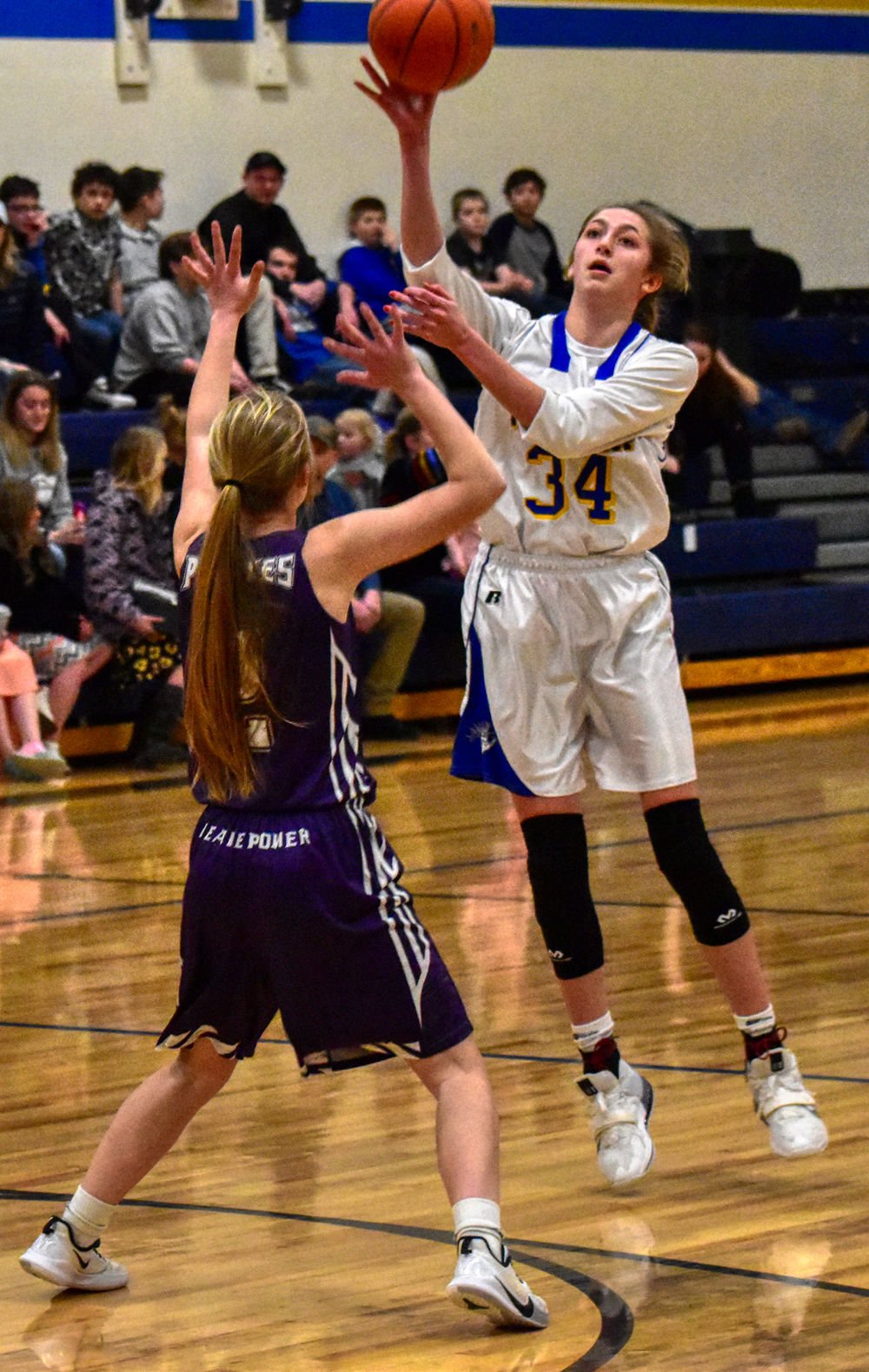 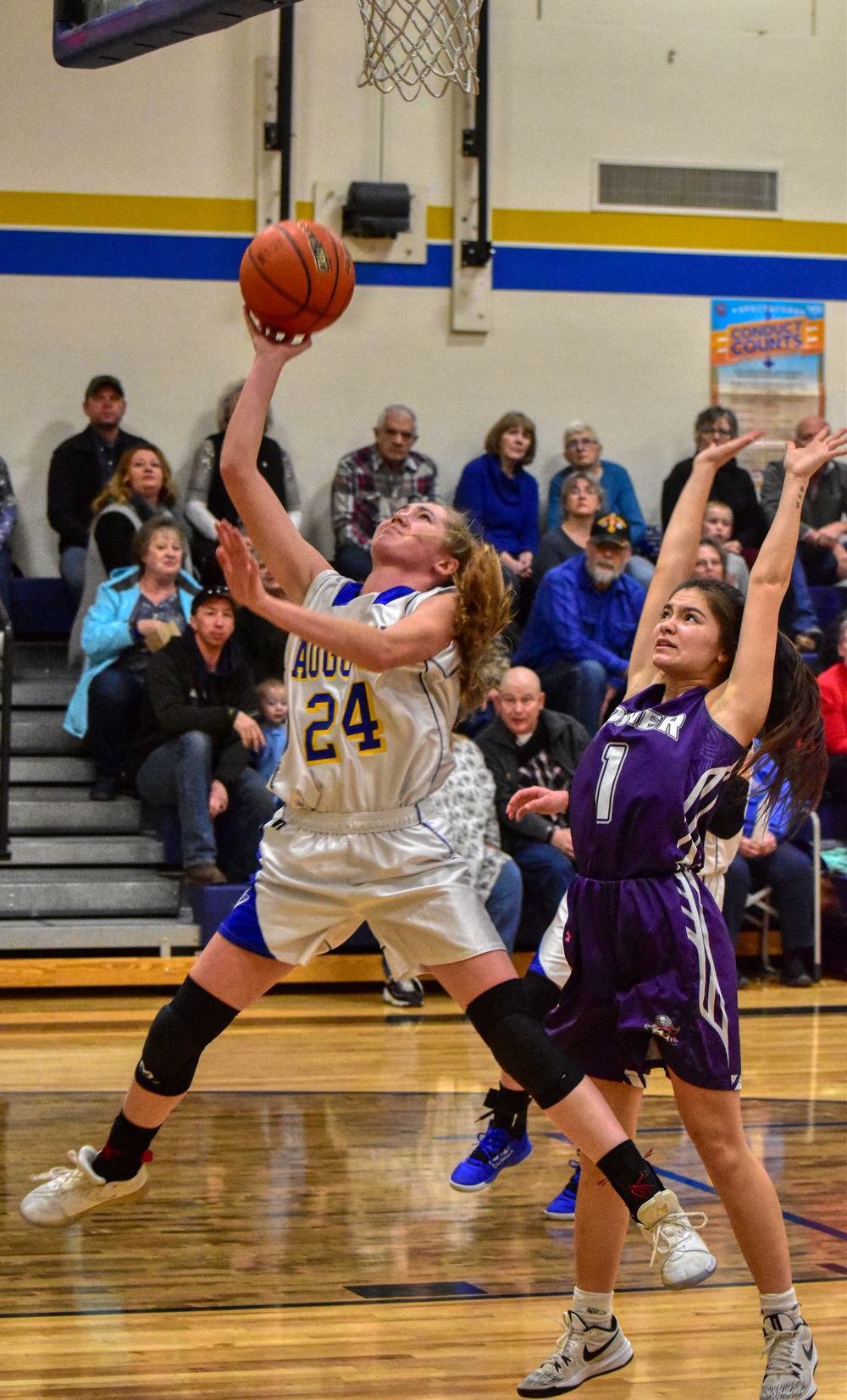 #24 Payton Levine goes for the goal as Power Pirates #1, Veronica Smelser, waits for the rebound. 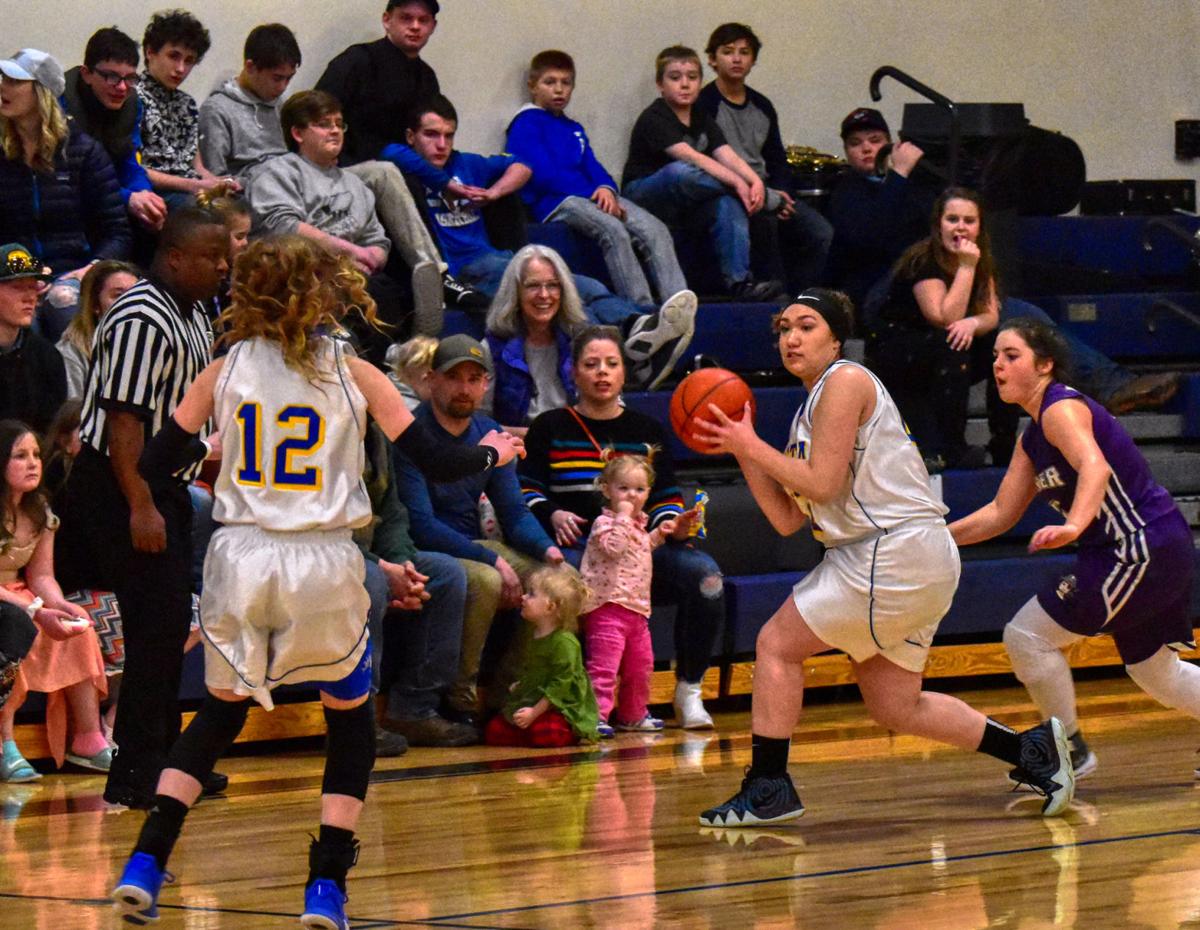 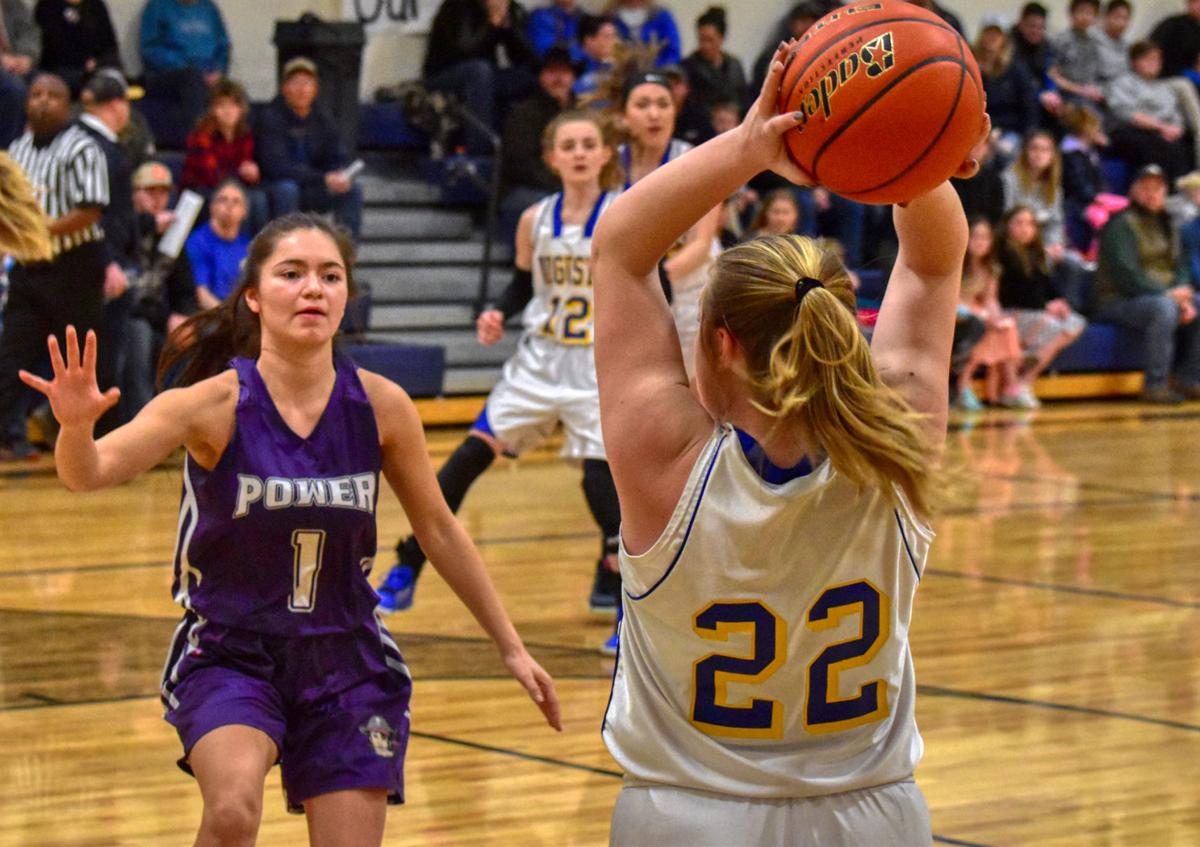 Augusta’s #22, Rylee Shalz looks for the inside pass as Power's Veronica Smelser, #1, prepares to block. 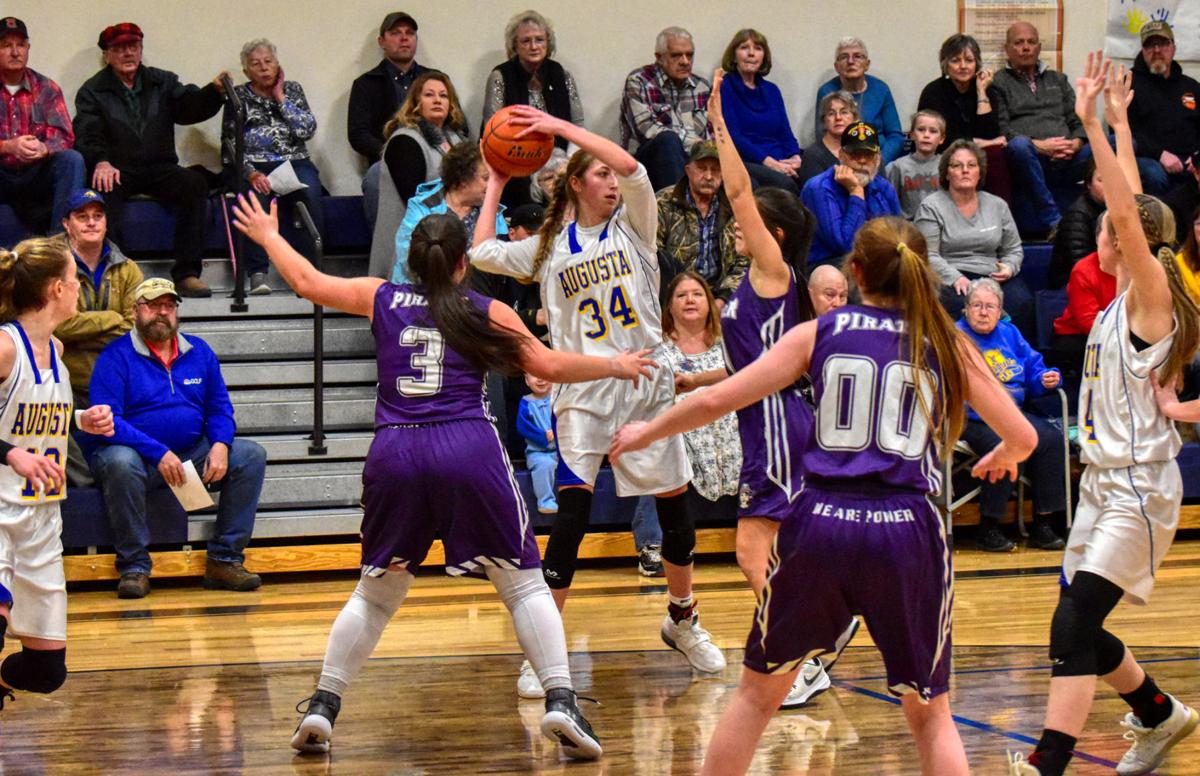 #34 Olivia Isakson gets ready to pass to #24, Payton Levine as Power’s #3, Amara Bodkins and #00, Sierra Sievers are on the defense. 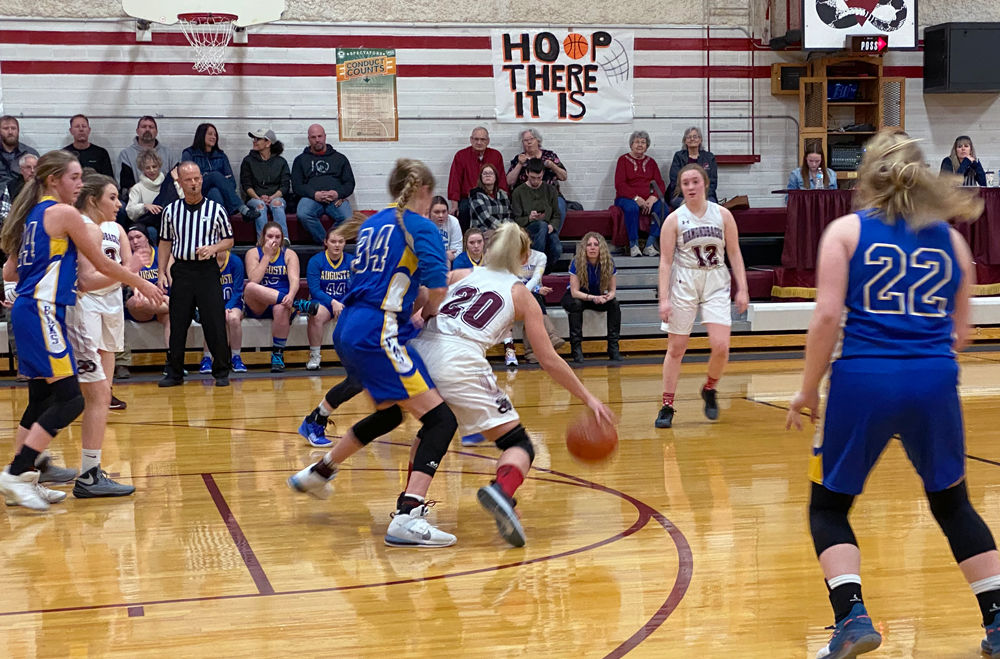 Isakson, Co-Captain and the game's top scorer, puts the pressure on a Diamondback player during Friday night's game. Mills is nearby, ready to assist.

Augusta’s #22, Rylee Shalz looks for the inside pass as Power's Veronica Smelser, #1, prepares to block.

#34 Olivia Isakson gets ready to pass to #24, Payton Levine as Power’s #3, Amara Bodkins and #00, Sierra Sievers are on the defense.

Friday night’s game that pitted the Augusta Lady Elks against the Dutton-Brady Diamondbacks was proof positive that these Augusta ladies are the real deal. The final score of 50 to 27 makes it look closer than it actually was.

In first half play, the Elks scored 32 points with 4 on the scoreboard for the Diamondbacks. Second half action brought in the Augusta Junior Varsity. The JV team held their own against the Diamondbacks, seeing Augusta win through with an additional 23 points.

Co-Captain Olivia Isakson, the top scorer of the game with 15 points, exclaimed her favorite part of the action on Friday was that the JV team got to go in and play the entire second half because their season is over. A class-act, Isakson said she loves the Augusta team because they play basketball as team ball and not as individual basketball.

Co-Captain and Senior, Bradi Hill attributes this shift to their coaches and trainer, Shelby Box.

“We’ve come out with fire and fury and are playing to our full potential,” said Hill.

On Saturday night, the Lady Elks returned to the home court for their final regular season game against the Power Lady Pirates.

Both teams kept up an energetic pace for the entire game, and the hardwood got a workout as both teams put the floor to good use with a game that kept moving across the court for it’s entirety.

At the end of the third period, Augusta had put 15 new points onto their total, with Hill contributing two; #14 Abigail Barrett added one. Levine put six on, while Allen added another point and Isakson brought five to the board. For Power, Sievers contributed six points; Bodkins three; Somerfeld two and Kinsey May, three.

For the last period, Power added 14 to their score, with Sievers bringing one point, as did Smelser. Bodkins added seven, while Somerfeld added three and Hailey May added two.

The Elks put 16 points on during the last period, with Isakson adding six; Dayna Mills brought in four points, as did Hill. Levine rounded out the fourth period contributions with two.

Asked by the Sun Times for her predictions about the outlook as the Lady Elks head to the District match in Shelby with their top ranking in the 10-C Northern Conference, Bradi Hill said she was optimistic so long as the team concentrates on “how to play,” not on who they are playing.

The Sun Times spoke with Augusta junior Rylee Shalz, #22, to get her thoughts on the season so far, and the prospects for the Lady Elks as they head to District play. Rylee has been on the varisty team for four years, the first three under Coach Genger.

Q: What’s was different about this season?

A: There are so many things that are different about this season! First off is we have a completely new coaching staff with new ideas, we are thankful for the last few years with coach Genger, but were also very excited for the new set of eyes and ideas that Kezia Allen brought to us! With the new ideas from coach Paul Hill, coach Terri Elder, coach Matt Bean and Kezia we have been very successful this season. At the beginning of volleyball season we started working more on our mental game with our trainer Shelby Box and have improved immensely with her support. We continued the sessions every other week throughout our basketball season as well and it truly has done wonders!

Q: Your team keeps their energy level from start to finish. Is that your training, or is it the mountain air?

A: Keeping our energy high is something that we have worked very hard on doing all season and it is finally coming together. One of our biggest problems this season has been starting slow and then getting fast; however, we figured out how to start quick and set the pace of the game and it truly has done wonders! It is definitely our training, I guess the fresh air might have some to do with it also. After coming off of our successful Volleyball season it really carried over into our basketball season. Kezia had high expectations from the beginning and was not going to let her expectations any lower for us no matter how much we slacked off some days! We have worked really hard all season and our work is paying off by going into the tournament as the number 1 seat.

Q: The Lady Elks are at the top of the 10-C, bringing a lot of pride to Augusta. Can you feel the support from the community?

A: I can definitely feel the support from the community. It is actually quite overwhelming the amount that they have given our teams throughout the season. Part of our success can be attributed to them, without their constant support at each game we would not be where we are.

Q: How do you feel about your prospects coming up with the Districts in Shelby, and beyond?

A: I am feeling really confident going into the district tournament. As Kezia has been saying we are all at the same level going into it and it is a new season for everybody. I think that if our team plays like we know we can we will do really well. Going into the division, I also feel good about it. Our division definitely has a reputation for being the toughest in the state. We have watched film on other teams in our division and are trying to prepare in advance. Overall we have had a great season and we are not looking for it to end at our district tournament in Shelby.’’

Terri Elder started coaching the Junior High team in 2010. Asked what makes this Lady Elks team work together so well and put points on the board, she told the Sun Times, “They have a strong work ethic and will give their all to the goals of the team.”

Elder went on to say that the coaching staff is “confident in the Lady Elks’ ability to get the job done and make some history."

Speaking of history, Elder added: “An interesting fact - Augusta has 16 girls in the high school and 15 participate in the [basketball] program, which means we have over a 90 per cent participation rate.”