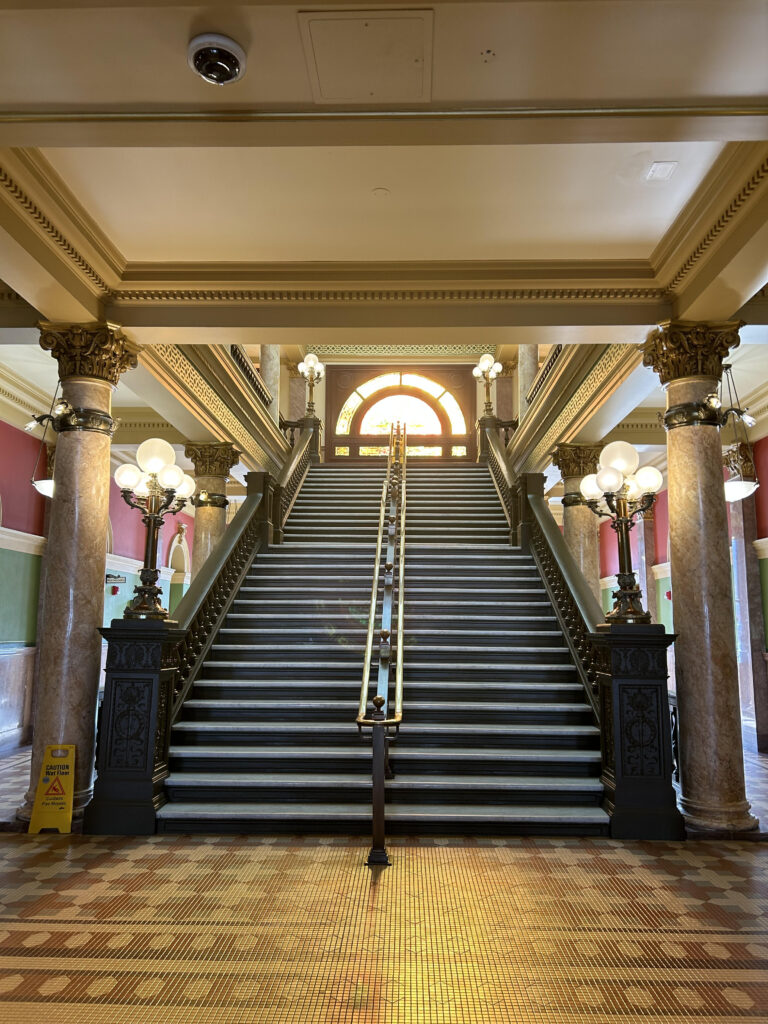 The grand staircase in the Montana Capitol in Helena (Photo by Darrell Ehrlick of the Daily Montanan).

Here’s the status of some of the legislation the Daily Montanan has covered this session so far. Follow bills through the Montana Legislature’s website.

Senate Bill 154, which drew heavy opposition and questions over its constitutionality at its first committee hearing, passed the Senate Judiciary Committee last week 7-4 on party lines. The measure seeks to add language to statute saying the right of privacy does not create a right to abortion in Montana.

A resolution, SJ5, that calls on Congress and the federal government to fully fund public safety and law enforcement on reservations in Montana passed second reading in the Senate on Monday 49-0. It is up for third reading Tuesday.

The legislature’s latest attempt to impose annual fees on electric vehicles, House Bill 60, passed the House Appropriations Committee 19-3 Monday afternoon after its first House committee hearing. It passed second reading in the House on Thursday 89-10. A fiscal note estimates the fees would bring in around $570,000 in the next fiscal year and $1.25 million in FY2027.

Most popular girl names in the '00s in Montana

A bill making changes to the Montana Water Court, Senate Bill 72, narrowly passed out of the Senate Natural Resources Committee in a 6-5 vote after amendments, which included changes to when water judges would be appointed and confirmed, and when and how a person could petition changes made to water rights.

Two bills on aerial predator hunting passed their committees unanimously last week after amendments that were mostly expected.  House Bill 104, which would allow nonresidents with permits to shoot coyotes and red foxes from aircraft, passed after it was amended to strike out language on reporting requirements that would have put the state in violation with federal law, the sponsor said. Senate Bill 84 was amended so drones could not be used to spot game on a calendar day, rather than a hunting day, which runs from 30 minutes before sunrise and 30 minutes after sunset. That came after concerns the drones could be used just before the hunting day opens to give hunters an advantage.

Senate Bill 100, which seeks to allow naturopathic physicians to prescribe more approved treatments to their patients, is headed to the House after passing the Senate 45-5 last Thursday.

Two bills aiming to speed up construction projects at the local level, Senate Bill 130 and Senate Bill 131, breezed through unanimously in the Senate Local Government Committee early last week and the full Senate. SB130 passed the Senate 49-0 and SB131 passed 47-2.

A trio of bills related to alcohol licenses that already passed the House saw their first Senate hearings in the Senate Business, Labor and Economic Affairs Committee. House Bill 98, which would essentially allow airports in Montana to operate their own licenses, passed the Senate in a 94-3 vote earlier this month and its first House committee hearing last Thursday. House Bill 43, which would require notification to the Department of Revenue within 180 days if a license holder dies or is incapacitated, was amended slightly in the House Business and Labor Committee to add a designee to language on who could report. It passed the Senate 94-3 and saw its first House committee hearing Thursday. House Bill 71, which would double the amount of time a license applicant could have temporary operating authority under certain circumstances, was also amended slightly in committee but passed the Senate 95-3. Its first committee hearing happened Friday in the Senate Business, Labor and Economic Affairs Committee.