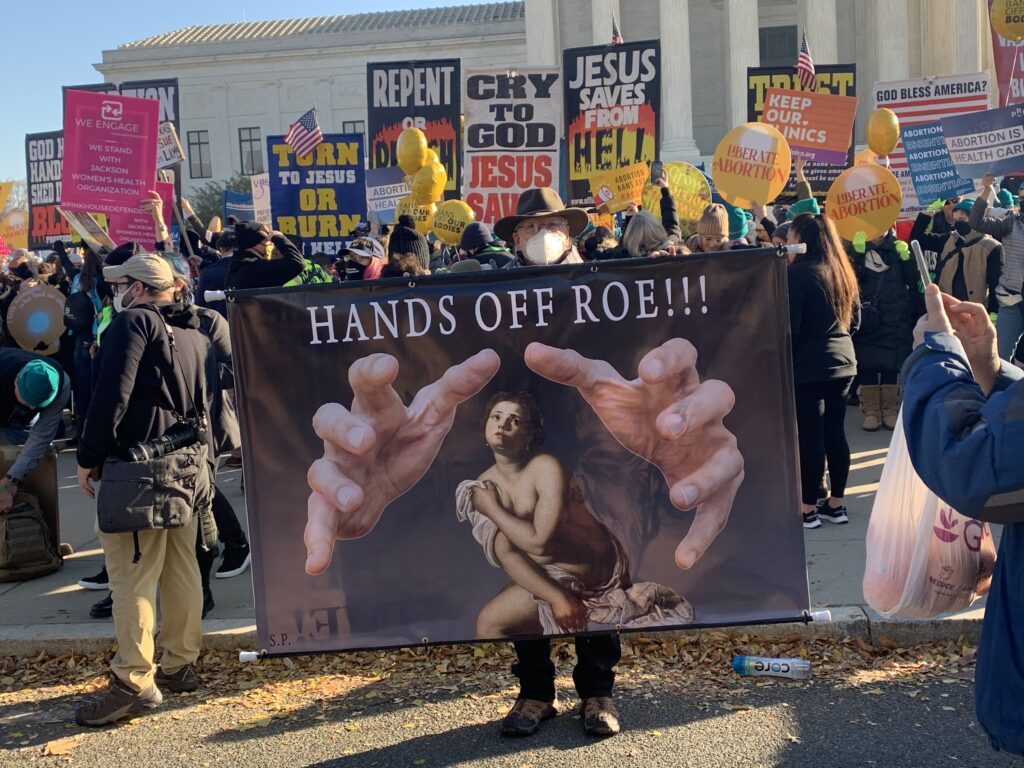 Protestors outside the U.S. Supreme Court on Dec. 1, 2021 as the high court considered a Mississippi law banning abortion after 15 weeks (Photo by Jane Norman for the Daily Montanan).

A legislative interim committee failed to pass a motion Monday that would have begun the process of drafting a bill to codify the access to abortion that currently exists in Montana.

The motion in front of the Children, Families, Health and Human Services Interim Committee by Sen. Mary McNally, D-Billings, failed on a tied vote with Democrats voting in favor and Republicans against. The vote comes just one working day after the U.S. Supreme Court overturned the historic 1973 Roe v. Wade decision that protected abortion based on privacy rights country-wide for nearly 50 years.

The committee is made up of five Republicans and five Democrats. The vote took place with no substantive debate.

The motion would have codified into Montana statute the current state of abortion and women’s health care access to the same extent that it currently exists and is protected in Montana. After the meeting, McNally told the Daily Montanan she didn’t expect it to pass, but she wanted it on the record.

Adopt a Teacher continues to grow and help teachers

“I wanted it on the record that at least some of us believe that we have a good setup right now in Montana the way it is, and we’d like to keep it that way,” she said. “I know (access to abortion) will probably be under assault again next session, so just wanted to say that I think it’s important that women have that right here.”

In Montana, the right to have an abortion remains protected under a 1999 state Supreme Court decision in Armstrong v. State, which extended constitutional privacy rights to medical procedures, like abortion.

Additionally, McNally said in the face of attacks on the judiciary from the GOP, the Armstrong decision is not something to be taken for granted and said she would like to see it codified into Montana law. Some Republicans have argued the judiciary is too liberal.

“It’s something that is an important health care provision for many women, and you can’t take it for granted,” she said, encouraging people to vote. “Things like elections of judicial candidates are very important.”

Originally published on dailymontanan.com, part of the TownNews Content Exchange.