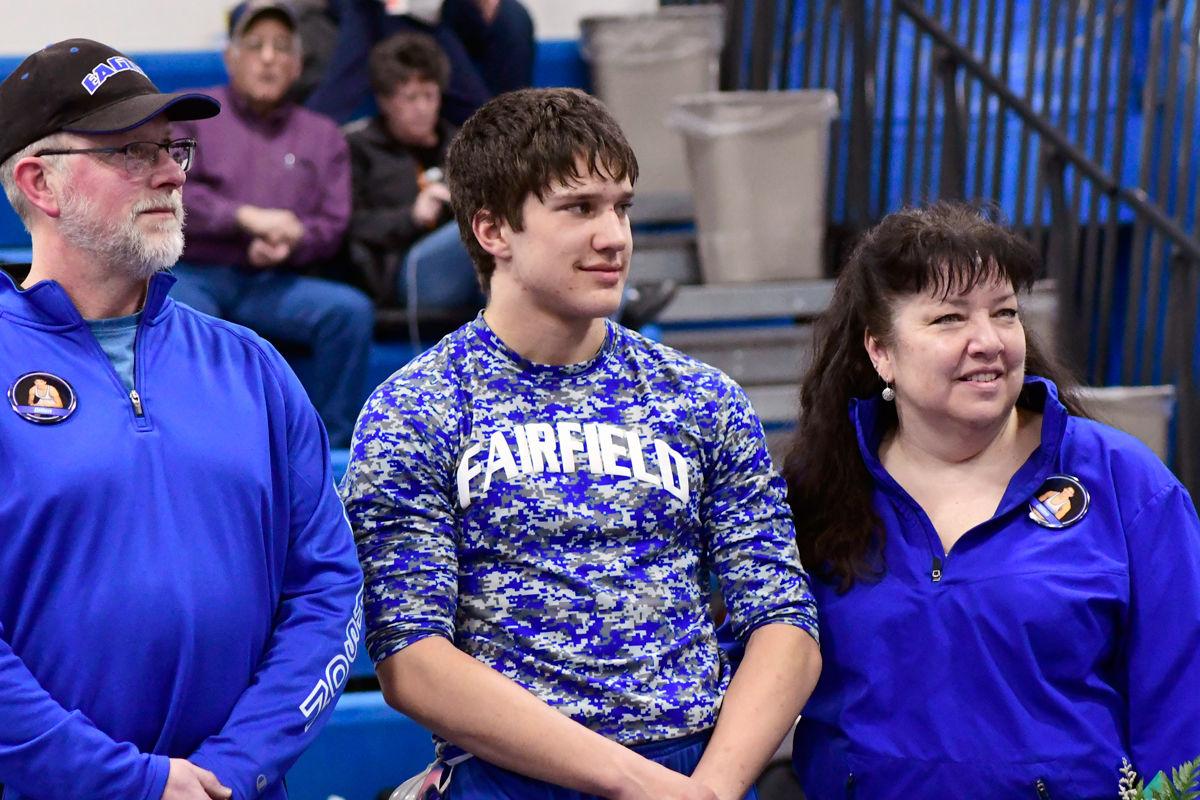 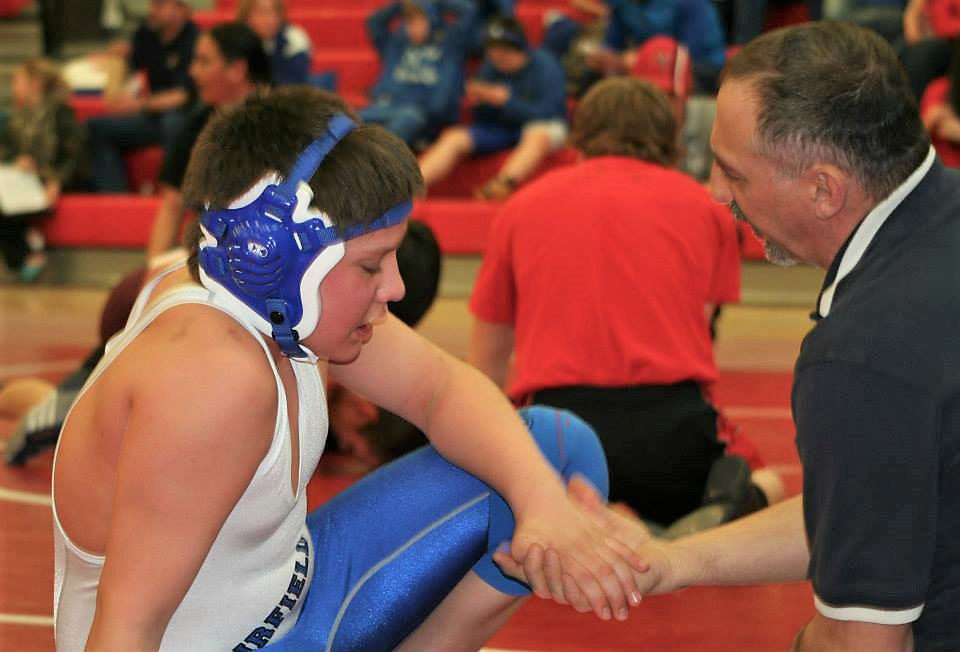 A young Dillon Anderson gets a hand from coach Mike May. 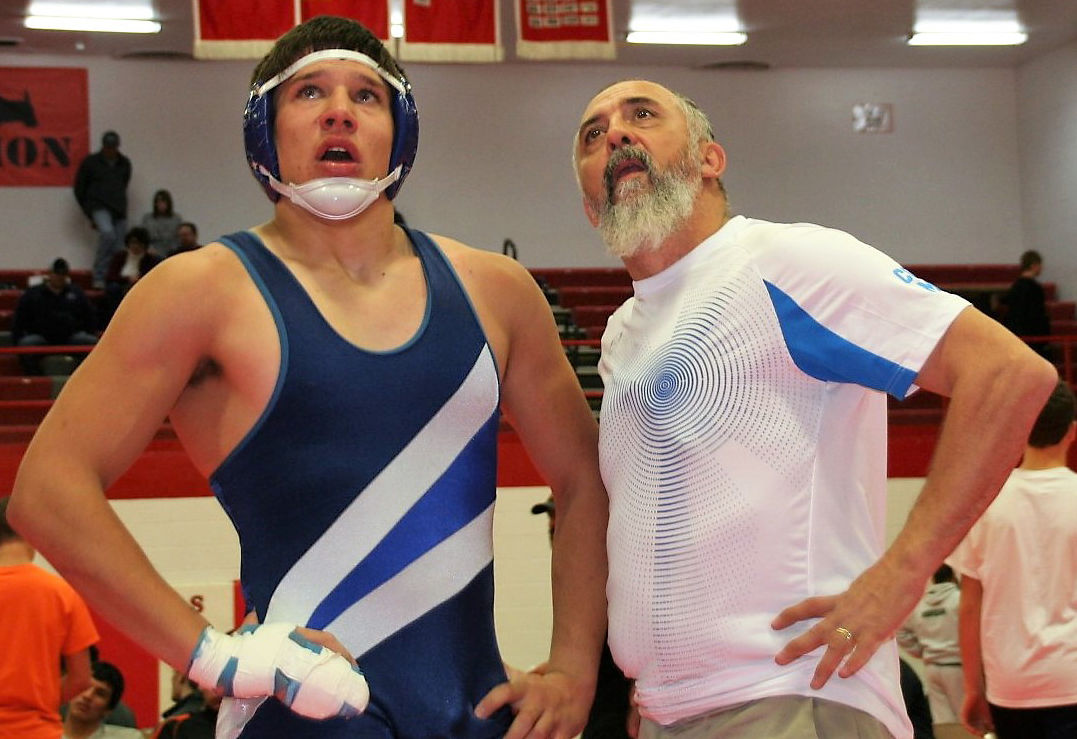 The lone senior on the Fairfield Eagles wrestling team with Coach Mike May. 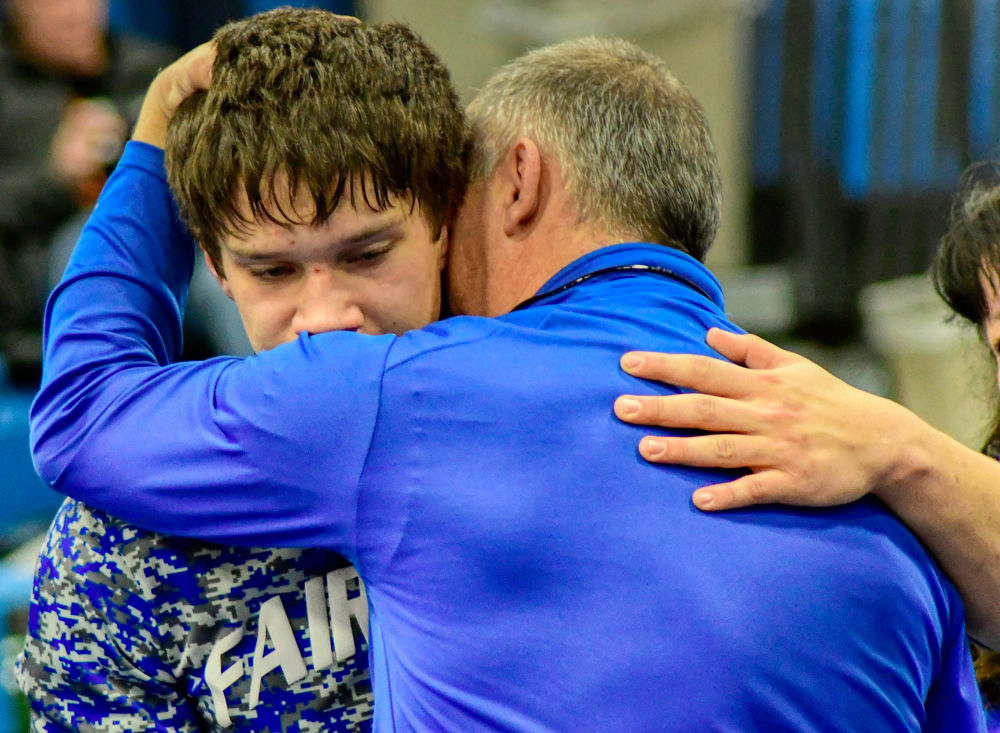 A young Dillon Anderson gets a hand from coach Mike May.

The lone senior on the Fairfield Eagles wrestling team with Coach Mike May.

Editor’s Note - I suppose this is one of those instances that gets filed under “Ain’t Technology Grand!” This article should have run last week, but between DropBox, iCloud, e-mail, cell-phone texting (ugh!) and the increasingly hectic Monday deadline, this article never made it onto the printed page (or the online page, for that matter). I wonder what the founder of this paper, Fred Schoensigel, would have to say about all the high-tech hassles we go through to get a paper out today? Well, I’ll trade DropBox for a old Linotype any day!

The Fairfield Eagles wrestling team saw a lot of exciting action on the mats this week and celebrated our lone senior on Senior Night. As I did last year, I’d like to focus this week on recognizing our senior wrestler.

Dillon Anderson started wrestling in 2010, two years after his family moved to Fairfield. He was encouraged to participate by his parents that have been wrestling fans for years. His father, Doug Anderson, wrestled in high school and helped coached Dillon and the other Fairfield Eagles Little Guys team. Dillon progressed to Eagle Junior High wrestling under the coaching of Loren Tacke and Mike May. It was at that point that he recalls coming to love the sport. As a freshman he “couldn’t believe it” when he qualified for the State Wrestling Tournament and that solidified his desire to excel at this sport. He did not qualify for State as a sophomore but did during his Junior season. He is determined to qualify again this year with a goal of performing at his maximum potential at the state meet. “I wrestle because the sport is not only physically demanding, but mentally challenging. Wrestling has taught me hard work, dedication, accountability and so much more,” says Anderson. “My wrestling mentors, both coaches and other wrestlers, have taught me what a leader is supposed to do and act like. They have taught me how to be a leader myself.”

Dillon has enjoyed the relationships he has developed with his team. He states, “Being a part of this team has been a wonderful experience. I have been able to make lifelong friends, not only on our team but from others as well. Teammate Thomas Troy shares, “Dillon is easily one of the toughest, kindest, and most hardworking people I know. He is an amazing wrestler and motivates all of his teammates on and off the mat. I am grateful to call him a friend.” Freshman Miquel Ramos transferred to the Fairfield program from Choteau and states, “Dillon is like the brother I never had. He is someone I look up to as a person because he is kind and helps guide his teammates into making good decisions. I also admire his work ethic, skill and determination the sport of wrestling.”

Long time Fairfield wrestling fan, Keith Giles followed this sport for many years. He shared his thoughts after watching Dillon wrestle on senior night in Fairfield, “In the sport of wrestling, you cannot base your success on states championships, trophies, medals, or ribbons, or the number of victories. If you do, you will be disappointed. In wrestling, you find your success in your improvements – mentally and physically. You make those improvements every day, every practice, every match, regardless if it is won or lost. I have seen those strides in Dillon through his wrestling career. Coach Mike May describes Dillon as “a great kid and a good leader. We are really going to miss him. He is wrestling on a very high level right now.” Dillon thinks highly of his coaches as well. “My head coach, Mike May, has been there for me from day one; constantly teaching and sharing his wealth of knowledge about the sport. He has made me a better wrestler. Andy Passmore has brought a new and very uplifting energy to our team. Tony and Jude May have been great sparring partners to have in the wrestling room. Working with them pushes me to my limits and teaches me new ways to become a better wrestler. I appreciate everyone who has taken the time to help me get better over the years; my coaches, my teammates, my opponents and my dad.”

If Dillon will be missed on the wrestling team, I think he will miss this team and this sport equally. Upon high school graduation this May, Dillon plans travel to Tehachapi, California to become certified in wind energy technology. He hopes to start a career maintaining our local wind turbines.

Our wrestlers participated in 3 separate events last week: the Valier mixer on Thursday, the Fairfield duals meet on Friday (Senior Night), and the Great Falls Central Catholic duals meet on Saturday. This week’s competition will include a mixer in Cut Bank on Thursday evening and a Friday night mixer in Simms at 6:30, in preparation for the Northern B/C Divisional Tournament in Cut Bank on February 2nd. All of our wrestlers will participate in the divisional meet; Miguel Ramos (103), Cael Giles (132), Miguel Perez (145), Blake Jensen (160), Dillon Anderson (170), Kolter Bouma (205) and Thomas Troy (HWT). The northern division includes the following teams: Chester/Joplin/Inverness, Chinook, Choteau, Conrad, Cut Bank, Fairfield, Fort Benton/Big Sandy, Harlem, Hays/Lodgepole, Malta/Whitewater, Shelby, Simms and Valier. The top 4 wrestlers in each weight class will qualify to compete in the State meet in Billings on February 8th & 9th. Good luck Eagles!!

Sorry, there are no recent results for popular images.