COVER PHOTO: The Jackson Sun parking lot sits empty, except for the author's pickup truck in the parking lot, on a recent weekday mid-afternoon. The building in the foreground was built in 1958.  In the background the larger production and distribution facilities can be seen. The production facility was shut down earlier this year. The Sun is now printed 300 miles away in Jackson, MS.

In the 1970s, when this photo was taken, it was rare to see an empty parking space at The Jackson Sun on a week-day.

The Great Falls Tribune logo attached to the wall of the top floor of the newspaper’s production facility. 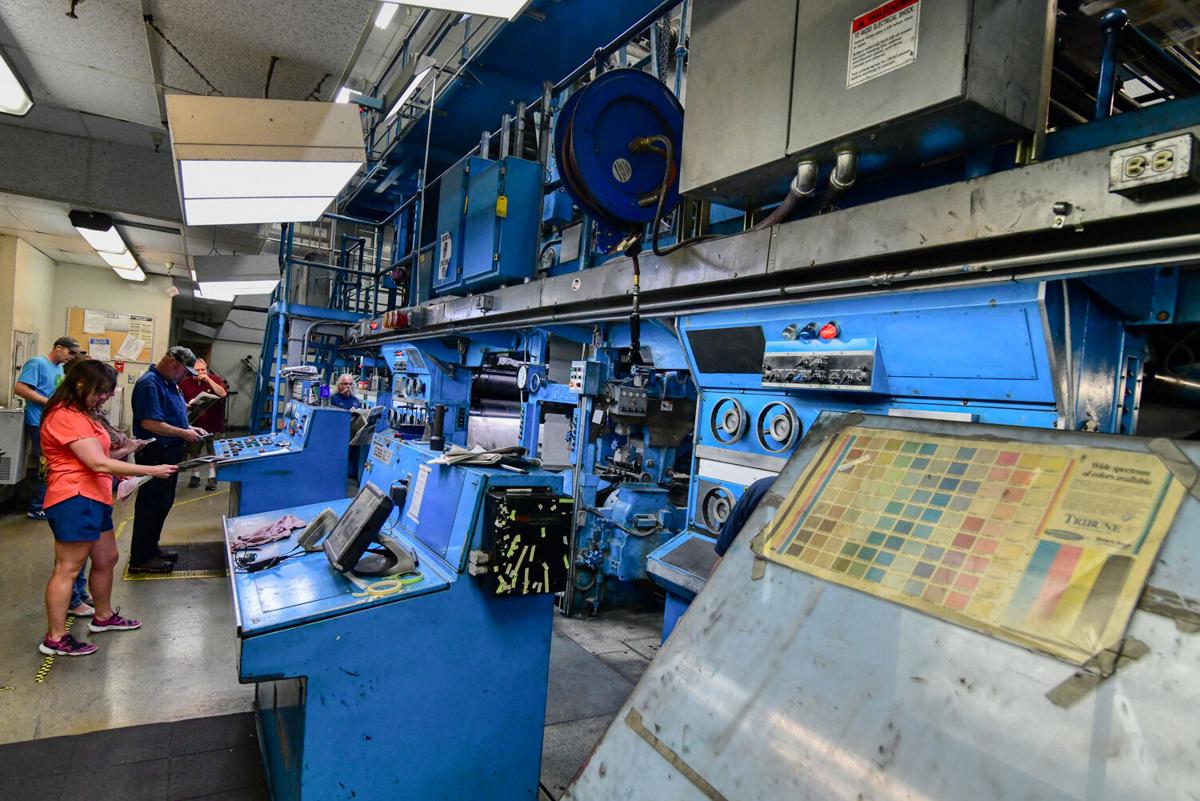 On July 12, 2020, the Goss Metroliner printing press ran the last issue of The Great Falls Tribune to be published in Great Falls. The Tribune is now printed at the Helena Independent Record. 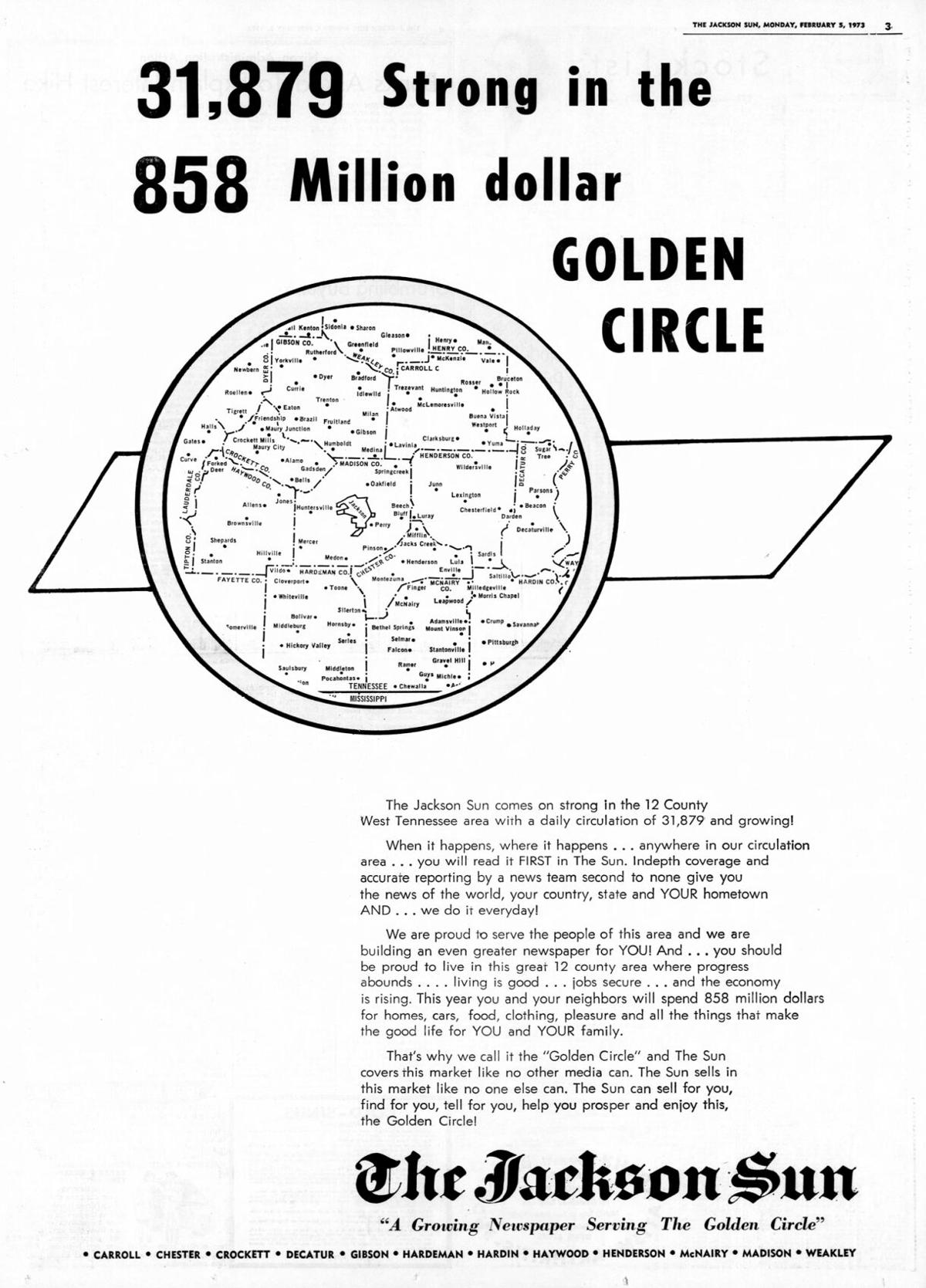 With this full page ad in The Jackson Sun of February 5, 1973, the newspaper launched a hugely successful brand, “The Golden Circle.”

The newspaper that I grew up at, The Jackson (TN) Sun, and our nearest daily, The Great Falls (MT) Tribune share some common history.

I love newspapers. All of my adult life I have had a daily newspaper in my home. Most of the time the newspaper was a “freebie” that I printed. Even after moving to Montana, I was a loyal subscriber to the Great Falls Tribune until a few years ago when I reviewed my credit card bill and ran the numbers to realize I was paying $650 a year for the Tribune. I don’t love newspapers that much.

I have the digital Tribune, but I don’t care for it. I think much of why I enjoyed the Tribune so much was because it was so similar to The Jackson Sun.

The Trib and the Sun have a lot in common. Both newspapers are less than a shadow of their former glory.

The Tribune and the Sun were both local newspapers.

For the Tribune, that changed on April 30, 1965 when the Great Falls paper was acquired by  The Minneapolis Star and Tribune Company.

A little over seven years later, on December 29, 1972, The Jackson Sun was acquired by The Des Moines Register and Tribune Company.

From personal memory, and based on reading The Great Falls Tribune archives, both newspapers benefitted from being part of a larger “chain” of newspapers. At the Sun, money was invested. In the newsroom, new editors and reporters were brought in. It seemed that the entire graduating class of The University of Missouri Journalism School followed the Sun’s new publisher, John Ginn, to Jackson.

And the money didn’t just flow into the newsroom; investments were made in the production departments. The press received upgrades to improve the print quality, and phototypesetters were brought in to replace the old Linotype machines. In all, thirty six Linotype machines were sent to the junk pile.

The Sun had always been an award-winning newspaper. The new personnel brought new life to the Sun and even more recognition.

The Sun, under John Ginn, launched an aggressive campaign to change Jackson, transforming the West Tennessee town from an economy based on cotton, railroads and soybeans.

An artist was brought in and put to work creating an image on one of the bland walls in the newsroom making a bold statement of purpose for The Jackson Sun.

The artist painted a map of Tennessee, with an enlarged “Golden Circle” that brought a focus on the region with Jackson at the center.

The sleepy old ways of Jackson were out. The Sun was successful in changing the attitudes in Jackson.

Soon, businesses that would have never given the town a glance were building factories.

From what I could see on this recent visit, that seed that was planted by the Sun is still yielding results.

Old country roads have disappeared. Now the old familiar routes have given way to new “parkways” and “boulevards.” Even Google Maps has trouble keeping up with the maps of my old hometown.

I wasn’t around here at the time, but I suspect that The Great Falls Tribune brought about similar changes to the Electric City.

With the acquisition of The Jackson Sun by the Des Moines newspapers, my dad was promoted from Pressroom Superintendent to Production Manager.

Dad was active in all of the newspaper organizations: ANPA (American Newspaper Publishers Association) was the largest of these. Through these associations, he had gotten to know publishers and production managers across the country, and Des Moines wanted to capitalize on those connections.

One evening, shortly after the Sun had been acquired, two executives from Des Moines came to our home for supper. I wasn’t interested in a dinner with two newspaper execs, but with guests like these, I could count on mom putting a beef roast on the table. I could tolerate newspaper talk if it meant mom’s beef roast.

One of the guests was David Kruidenier, president of the Des Moines Register and Tribune. Kruidenier was a third-generation member of the Cowles family.

COVID-19 Treatments: What You Need to Know

After the dinner was over, dad came into our den and asked if I had been paying attention to the conversation. When I told him I hadn’t, he said, “What they are planning will mean the death of the daily newspaper in the US.”

I thought that was a bit of an overstatement, but I never forgot those words.

When I left Jackson for good, around 1980, the Sun was in a strong position. Newspapers were considered “cash cows” by the bankers.

In 1985, the Des Moines Register and Tribune Company was acquired by Gannett Co. for about $200,000,000. The Jackson Sun was part of that purchase.

In 1990, The Great Falls Tribune came under the ownership of Gannett.

Both the Sun and the Tribune had been strong publications with long histories serving their communities.

Before I left Fairfield for my cross-country journey, I asked friend and former co-worker at the Sun, Wally Strong, to reach out to the Sun. I wanted to make a short visit and talk with the Sun sports editor that is now in charge of what’s left of the newspaper.

And I wanted to photograph the building. I have a collection of photos from the 1970s taken throughout the Sun. Now I wanted to document the skeletal remains of this once great publication.

No one responded to Wally’s calls. I have no grudge regarding this, the Sun sports editor has his hands full.

When I pulled up in The Jackson Sun parking lot, there was one other car. Just in case I might get someone’s attention, I knocked on windows and doors. No one came out.

I walked around the building, trying every door. Barely visible through one of the doors that leads into the Sun’s production facility is an old Heidelberg printing press.

After she had retired from real estate, my mom went to work in the print shop at the Sun. She did diecutting and embossing on this old finger-smasher of a press, which worried me to no end. I would think about how often my mom had worried about me, and now I knew the feeling. She never got her finger caught in that old press.

Over the years, in addition to mom, dad and myself, other family members would work at the Sun. My sister, Janet worked there. My nephew, Dwayne, was a long timer. When he died a few years ago, the Sun ran his obit on page one, above the fold, all across the page with a color photo. That was a class act on the part of the Sun. I tried to call and thank them, but no one was there to answer the phone.

My other nephew, Grant, also worked at the Sun. My uncle, Allen Zachary, was another long-timer. Allen liked to wear his overalls to work when he was transferred to the pressroom. Management at the Sun threatened to fire him, so he hired an attorney and went to the labor board. Ol’ Zack won the case.

Two cousins, on my dad’s side, worked at the Sun, and an uncle on my mom’s side would land a job working on the press printing USA Today at Gannett Offset in Nashville.

It’s clear that our family had a long history with the newspapers.

I wanted one last visit.

When I failed to get anyone’s attention by banging on the doors and windows, I walked into the Sun’s foyer. Since the building was built in 1958, and all throughout my time there, you could always count on a copy of the day’s Sun being for sale in the foyer newsrack.

The rack is gone, and out front was an empty and rusting old rack for a free Memphis entertainment newspaper, The Memphis Flyer. From the looks of it, that rack has been empty for years.

In the foyer there was a sign on the door leading into the newspaper’s front office that tells me if I want a copy of the Sun, I should send an email to “Mariah” and set up a time to meet her to purchase a copy of the Sun.

Do these people even want to sell a copy of their newspaper?

Just as with the Tribune, almost all of the newsracks are gone. I did come across one one at a convenience store just up the road from Northside High School, where I graduated in 1975. I noticed that the rack is empty and when I asked the attendant inside if he has a copy of the Sun for sale, he told me that he kicked them out of his store when they stopped maintaining the rack out front.

At another store, I asked for a copy of the Sun. The only copy they had on the shelf is 11 days old. When I asked if they have a newer edition, the lady behind the counter told me, “We never know when we will see anyone from the Sun delivering newspapers.”

At the Walgreens Drug Store in the Hicksville neighborhood of Jackson, I’m told the same. The clerk even asks me if the Sun is still being published.

When I do find copies, even ones that are several days past their fresh date, they are of the same size as the Tribune, with roughly the same amount of advertising content.

The decisions that were made that put these newspapers into a death spiral were not made locally. No one at the Tribune or at the Sun had any say in how their newspapers were managed.

During my journey, I found that for the daily newspapers, it was much worse than I had imagined.