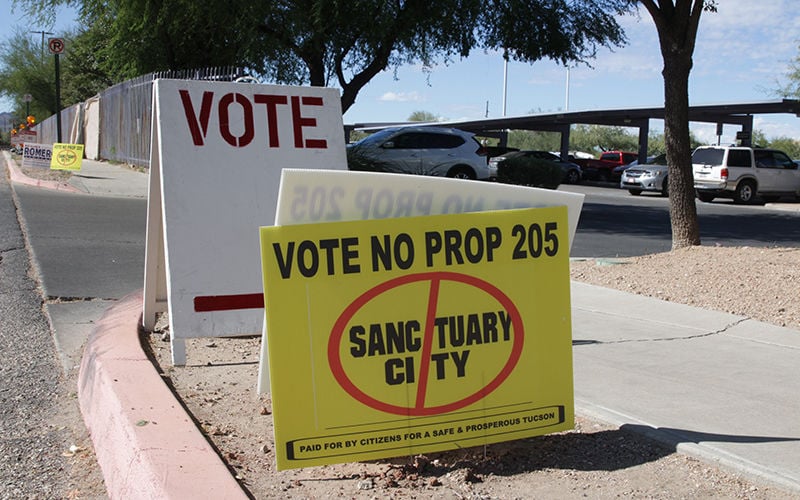 Tucson residents vote Tuesday on Proposition 205, which if passed will make Tucson the Arizona's first and only sanctuary city. Here, the Department of Housing and Community Development is one of several polling locations around the city. (Photo by MacKinley Lutes-Adlhoch/Cronkite News) 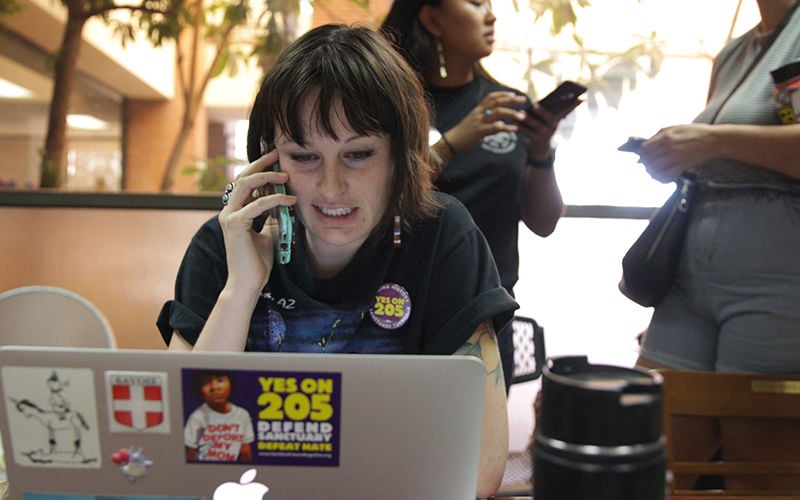 Volunteers at the People’s Defense Initiative made phone calls to remind Tuscon voters to cast their ballots and vote yes on Prop 205 on Tuesday. Angéline Fahey has been volunteering with the organization for a few weeks canvassing and donating art. “We have to do something, we can’t just be silent,” she said. (Photo by MacKinley Lutes-Adlhoch/Cronkite News)

Photos from a candlelight vigil in honor of Selena N…

TUCSON, ARIZONA – Voters on Tuesday overwhelmingly defeated Proposition 205, which would have declared Tucson the state’s first sanctuary city. The vote came amid warnings from the Trump administration of possible federal sanctions costing the city millions of dollars.

Backers said the purpose was to reduce police interaction with federal immigration authorities.

“We are still the home of SB 1070,” said Zaria Livier, director of the People’s Defense Initiative, which pushed to place the proposition on the ballot. “That law makes any member of law enforcement a de facto immigration officer.”

SB 1070, passed in 2010, allowed any member of law enforcement to ask about someone’s immigration status based on “reasonable suspicion.” Detractors said it was widely used to discriminate against Hispanics.

Council member Steve Kozachik, usually in favor of issues that would help immigrants, said he was relieved the proposition didn’t pass because the language was “too broad.”

Kozachik said he is more than willing to consider the measure later if it’s revised.

Tucson voters had mixed feelings about Prop 205 even being on the ballot.

“It’s absurd, there is no need for any of that stuff,” Harry Smid said as voted Tuesday. “We need police – we don’t need sanctuary cities.”

Smid added that he already is frustrated with how the police work, and he carries a gun to protect himself.

Australians warned to watch out for deadly spiders

But another voter, Jennifer Wylie, said Tucson should become a sanctuary city.

“It’s criminal what they are doing to these people,” she said of immigration authorities.

“If you violate an immigration law in the U.S.,” he said, “it’s a civil violation, not a criminal violation.”