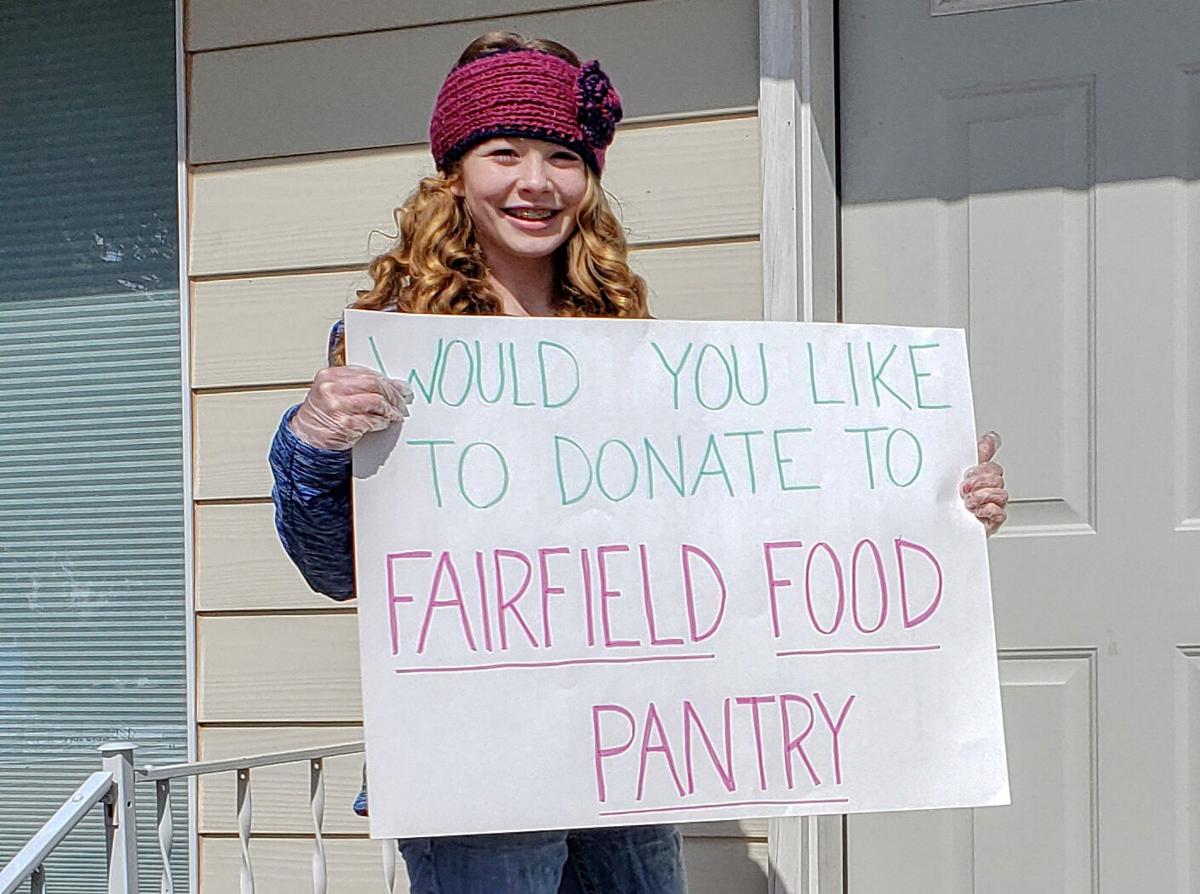 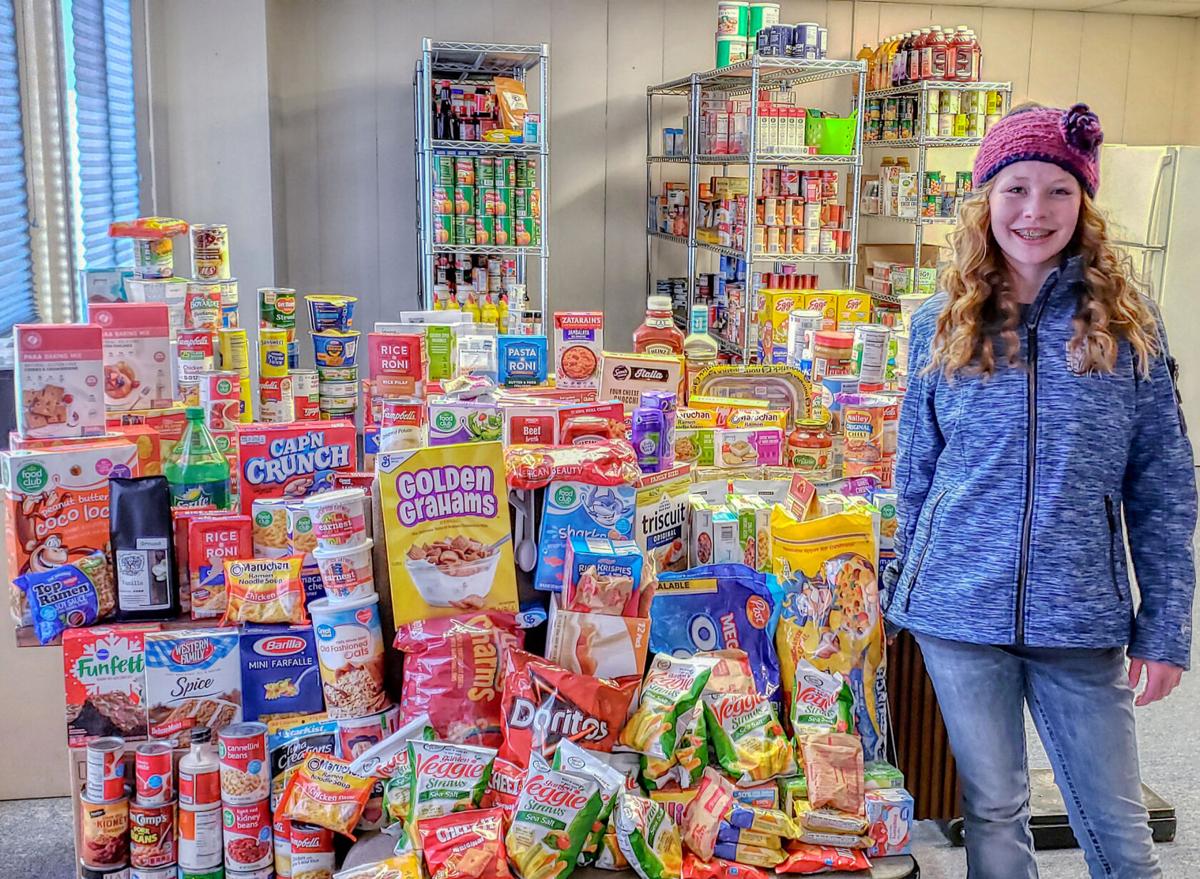 Kyona poses with some of the goods donated to the Fairfield Food Pantry earlier this year.

Earlier this year, during a food drive for the Fairfield Food Pantry, Kyona Yeager and her mom, Kande, drove around the community picking up donations of food left on porches. Some donors included a nice message along with their donations, like this message left on an envelope, “Kyona - Bless you... We love you”

The past week seems like a blur to Calon Yeager of Fairfield.

It was “last Wednesday or Thursday” [August 12 or 13] that the daughter of Calon and Kande Yeager, Kyona, age 14, showed the first symptoms, primarily a high fever. Kyona was taken to Great Falls Clinic, and from there she was life-flighted to Intermountain Primary Children’s Hospital in Salt Lake City on Sunday, August 16.

In a phone interview last Friday, Calon told the Sun Times that the family has been dealing with “a lot of information… hard to process.” But, said Calon, this is not your run-of-the-mill COVID. “It’s rare,” said Calon. Kyona is “the only person in Montana who has had this reaction for kids of her age.” When Kyona checked into Great Falls Clinic, she was tested for COVID because she was showing COVID-like symptoms, but there was a sludge building up around her bladder, which was leaking.

On Thursday, Kande posted this on her Facebook page, expressing how sick Kyona was:

I’ve never cried out to the Lord, begging for a miracle, as much as I have these past 5 days.

From the time she was admitted to the Great Falls Clinic on Sunday, to today in Salt Lake City, there are a few things that Kyona has been going through (some that she is conquering!):

Her entire body is swollen (she’s gained 17 pounds of water weight in 5 days). Every vein in her body is dilated. Her lungs are filling with liquid. She’s sedated with a BiPAP to breathe. She’s been pumped with epinephrine for 24 hours, straight into her heart.

Her entire body is jaundiced. We’re still in ICU and will be for a while. The nurses talk to her about envisioning the day she’s showing cattle again. It’s the only time her jaundiced, bloodshot eyes lit up.

I’ve slept about 3 hours in the past 5 days. I’m aware I need rest. But I’m also the one watching her chest fall and rise with each breath and I’m not going to miss a single one.

My heart aches that Calon and Cyler aren’t here to hold her swollen hands with me. I weep at the image of us pulling into the house and seeing them once this is all over.

Calon said that the doctors believed Kyona had COVID sometime between two weeks ago and a month ago.

Later Thursday, as our community, and others around the world prayed for Kyona and the family, there was a turnaround in Kyona’s condition.

Kyona’s improvement continues! Shes still however in the icu and needing help with her breathing. To be able to leave the icu she needs to be able to for the most part breath on her own with her levels staying in the same range they are now maybe a little better. She is at least a few days away from coming home. Her condition is acting more now like the regular covid than what (can’t remember what he called it) was wreaking havoc on her before. So just regular covid 19 thank God.

Her team is working hard at whipping this with her. Her mother’s shadow is always over her bed.

Kande and I stand in awe at the support of our community and by community i mean the state of Montana and beyond. It’s a gift that could never be truly understood until your standing in my shoes (helpless and knowing its out of our hands). We are strong people but its nice to have everyone as backup ready to do whatever is needed. You wouldn’t believe the calls I’ve gotten. Texts that (we are hear for you) and Facebook messages by the bunches.

Your right she is a fighter! I’m so proud of that too. She has a lot to do in this world yet and I guess plans on seeing it to an old age.

This country my seem upside down to some but not me. We are in great times we are amongst great people we are good to one another. People care for their neighbors and have taken a serious interest in a young lady worth the time. So many good things happen daily and get swept under without notice.

Some people ask what do “prayers and thinking of you” do? To that I reply EVERYTHING

I’m thinking we should start a food drive in Kyona’s name it’s something she likes and it’s something we can do to keep us busy till she’s in our arms again.

Calon was thankful for the work of the doctors at Salt Lake City, “If we didn’t take her from Great Falls Clinic to Salt Lake City, we would be singing a different tune.”

Calon is awed by the prayers for Kyona and the family. He told the Sun Times that Kande’s family had told of a prayer chain that was started in South Korea that had spread north into North Korea – a country that officially is an atheist state.

Long lines form outside of food banks ahead of the holidays

Calon told of how, even though she was battling for her life, Kyona still had some fight in her. As Calon told the story, Kyona resisted having a BiPAP mask put on her face to assist her breathing. “It took Kande and two nurses to get the mask on her. I felt sorry for Kande having to deal with that, but we knew that Kyona was still fighting.”

Kyona’s Biggest Drive was organized on Facebook and by Sunday had grown to over 2,200 members, coming together to honor Kyona for her support of area food banks. The group urges people to raise donations of money or food to support their local food banks. “It’s a good deal,” said Calon Yeager. “Someone left $500.00 in dad’s pickup truck” for the ‘drive.’”

Asked if the family needed anything from the community, besides their prayers and support, Calon said “no, we do know where to reach out if we do need help.” He added that even though people will be tempted to stop by, he hopes everyone understands that until the doctors have more answers, they want to limit the exposures of Kyona and the family. “There may be a long road to recovery.”

On Sunday afternoon, that recovery was well underway, as this post from Kande explained:

Today, she laughed for the first time in a week.

Her fire was ignited 3 nights ago, when the sedation started wearing off and oxygen was still being forced. I showed her videos of support, read words of grit and encouragement. I reminded her, THIS IS WHAT YOU’RE FIGHTING FOR, as tears rolled down my cheeks.

Her fire has become a raging inferno; her drive... determination... FOCUS... all of it is off the charts. The last couple days, she’s told the doctors that she has things to get back to at home. She has cattle to show and football to manage.

Nothing but sunshine and rainbows, guys. Her labs are ALL going towards normal. Kyona’s lungs will take time to heal but the doctors are expecting NO LONG TERM DAMAGE to her body!! We’re not quite ready to leave but her team of doctors will be discussing what the transition home looks like, during their morning rounds tomorrow. Calon and Cyler are on their way, anxiously awaiting the day she’s released. There are no words...

Earlier this year Kyona made helping the Fairfield Food Pantry a top priority. On March 24, she launched Kyona’s Take Action” project as part of her Girl Scout project. Her efforts brought in 2,200 pounds of food donations and $2,700.00 in monetary donations, according to a story published in the Fairfield Sun Times (See “With Kyona’s Help, Fairfield Food Pantry Has Best Month For Donations” at https://bit.ly/3lhtGaD).

That project brought much needed attention to the plight of families needing food in our region just as the Coronavirus began to impact the country.

“Kyona’s efforts helped to sustain the Fairfield Food Pantry,” said Megan Caffyn, with the local food pantry. Caffyn said that those donations came in just as schools were shutting down and people were being sent home from work. “Now,” Caffyn went on to say, “things have gotten back to normal, with our pantry serving about 20 families.”

Still, Caffyn has concerns about the future needs of the community when it comes to food. “It all depends on what this school year brings.”

Caffyn said of Kyona, “She is such… so genuine… such a nice person. She’s always looking for a way to better herself and to help those around her.

From a story about the cookbook published in the Sun Times in  June, “Kyona’s goal with the cookbook was to offer recipes that could be made with ingredients often found at area food pantries. ‘When I found there were many families that didn’t know how to use all the food items in the food pantry family boxes, multiple Girl Scouts and I started researching recipes with food primarily found in the food pantry. We tested and created simple recipes.’”

The cookbook of simple recipes was such a hit that quite a few people asked for a printed version, even though the digital version was available for free.

The printed cookbooks are available at Fairfield Drug, located on Central Avenue in Fairfield. The cookbooks sell for $10 each, with all profit over the cost of materials for the book going to the Fairfield Food Pantry. Anyone interested in purchasing one of the cookbooks can contact Fairfield Drug at 406.467.2336.

Those wanting to support “Kyona’s Biggest Drive” can find more information on Facebook. Participants are urged to make a donation to their local food pantry. It is suggested that you contact your food pantry to see what they are most in need of. In Fairfield, Megan Caffyn said they always have a need for canned vegetables, apple sauce and baking supplies, such as sugar, flour and vanilla.

The Fairfield Food Pantry, due to COVID, asks people to leave their donations in the foyer at the Fairfield Community Hall. Food items can be left there 24/7. There is also a secure slot where donations can be left, next to the food pantry door.

For those outside of the area, they can mail a check donation to the Fairfield Food Pantry, P.O. Box 642, Fairfield, MT 59436.

Earlier in August, the Sun Times was proud to run – on the front page and “over the fold” - Kyona’s first bylined story for the Fairfield, Montana newspaper, “Coach Misner Plans To Keep Eagles’ Football Culture.” The story was a profile of new Fairfield football coach Greg Misner and his family. Kyona had other stories in the pipeline. Her byline and page one slot are waiting for her.

Dutton/Brady School District is looking for an elementary teacher