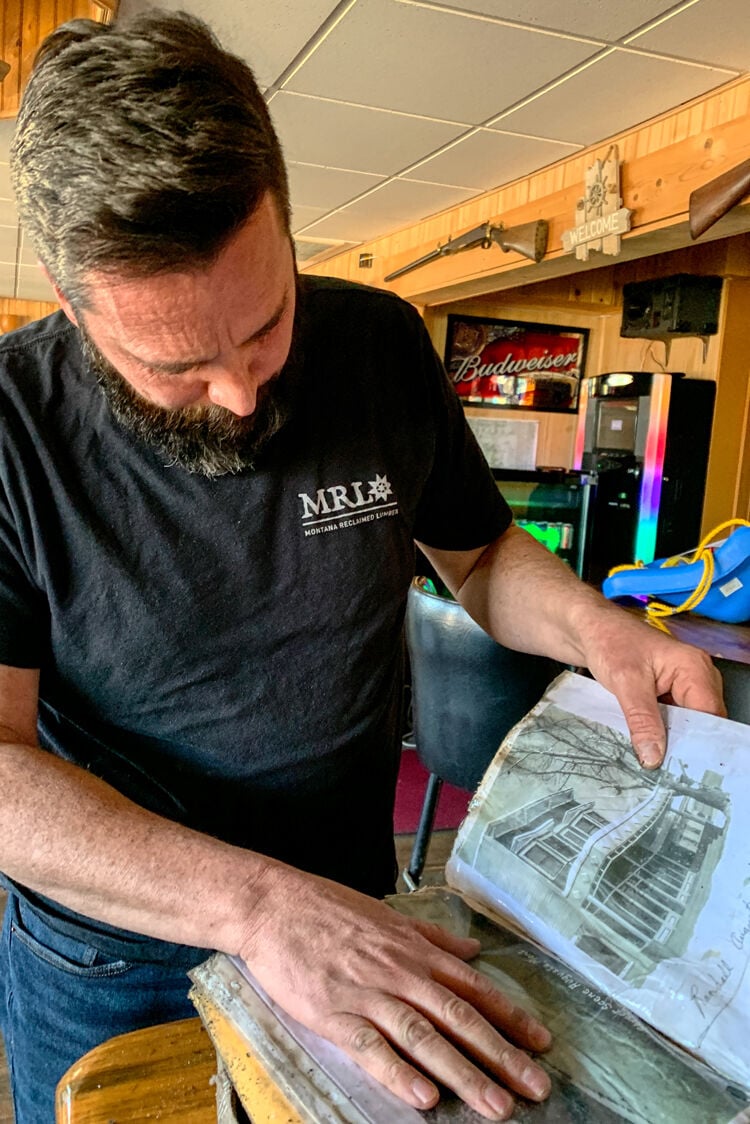 Matt Folkman looks through some of the photos in a photo album salvaged after the Bunkhouse fire. 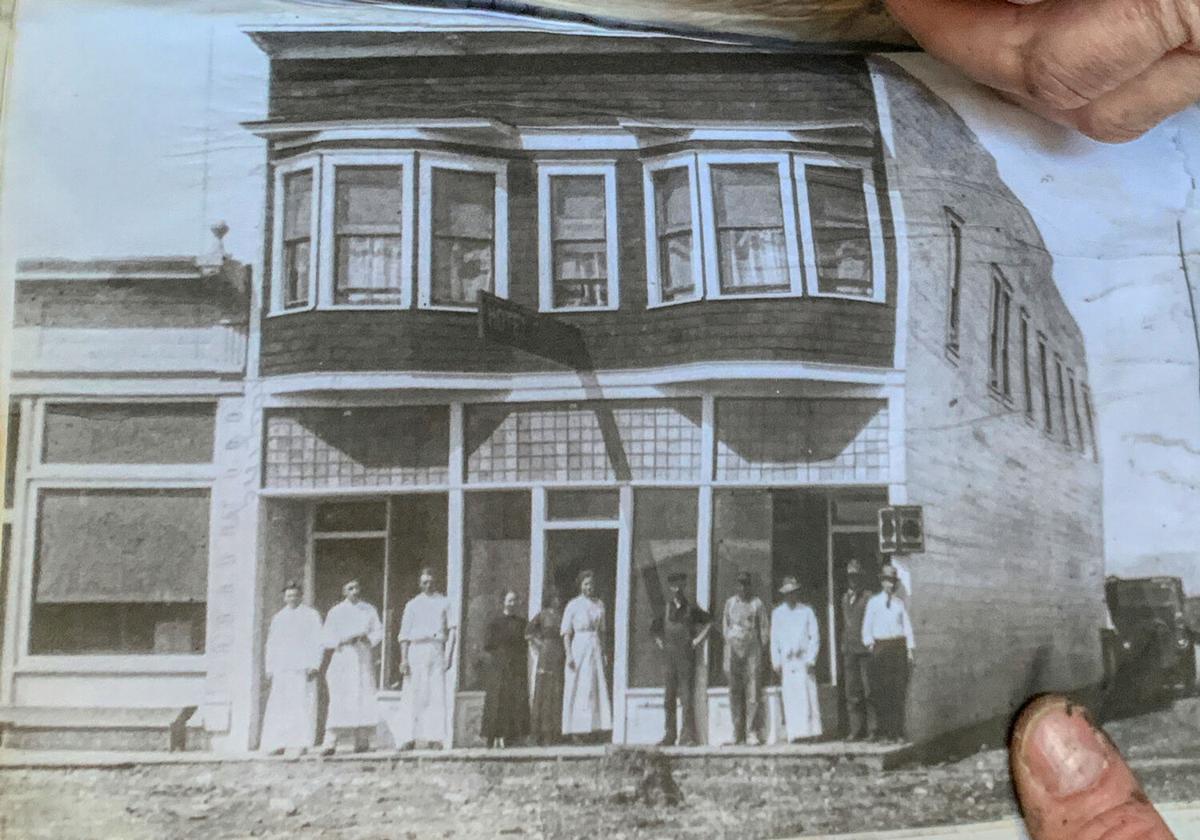 This photo, from the salvaged album, shows a group gathered in front of the Gilman Hotel. The building was moved to Augusta when Gilman failed and became the Bunkhouse. Note the small glass panels above the ground-floor windows. Some of those were discovered after the fire and will be incorporated into the new design. 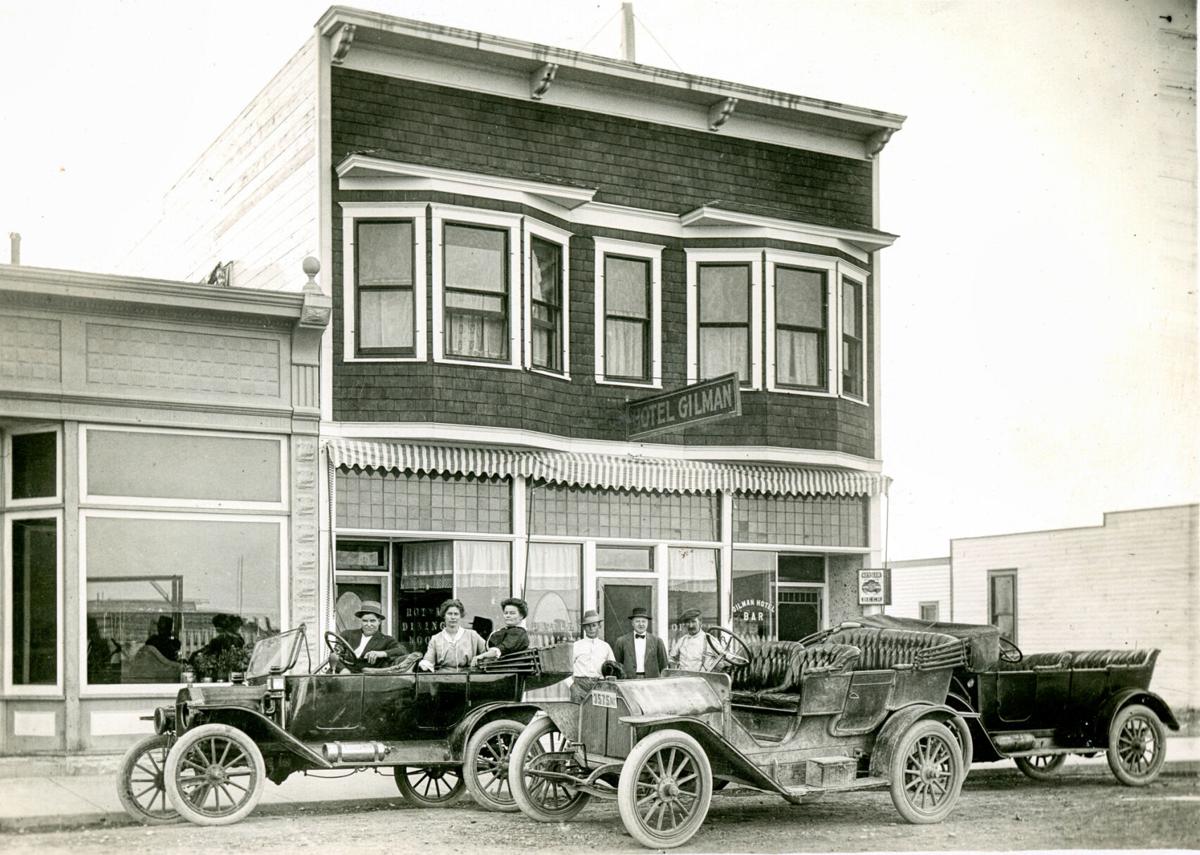 The Bunkhouse in the early days, when it was the Hotel Gilman. 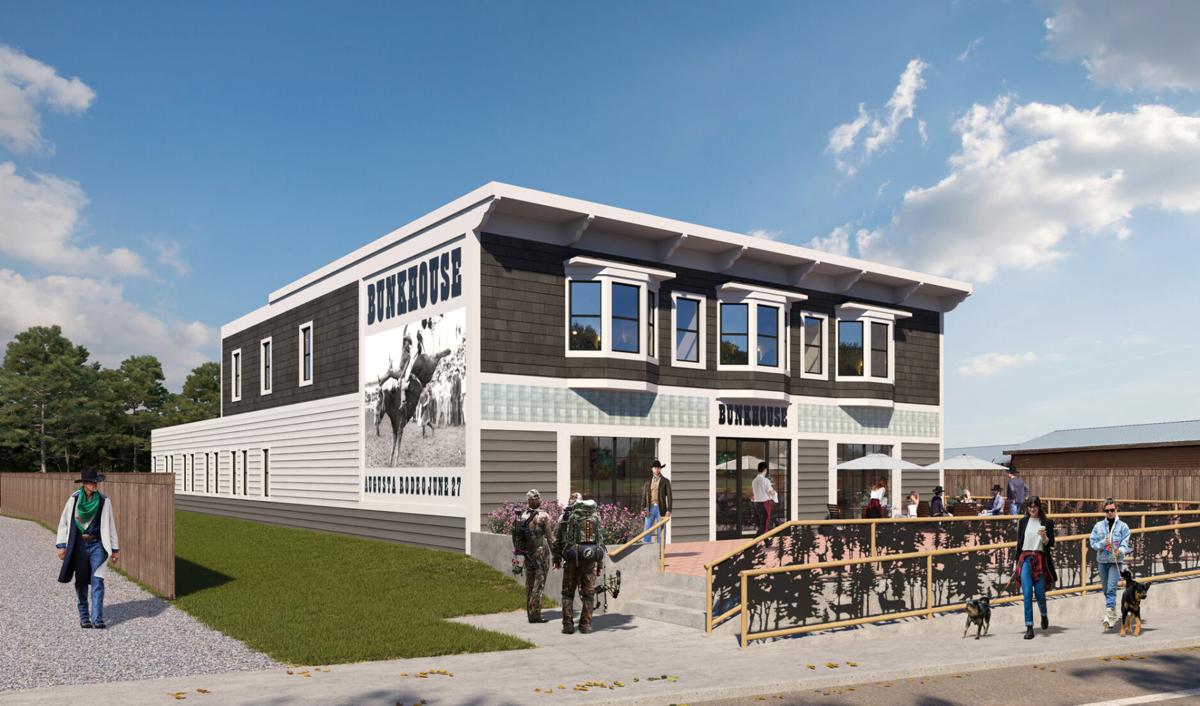 This rendering of the Bunkhouse exterior shows the plaza planned for the front. 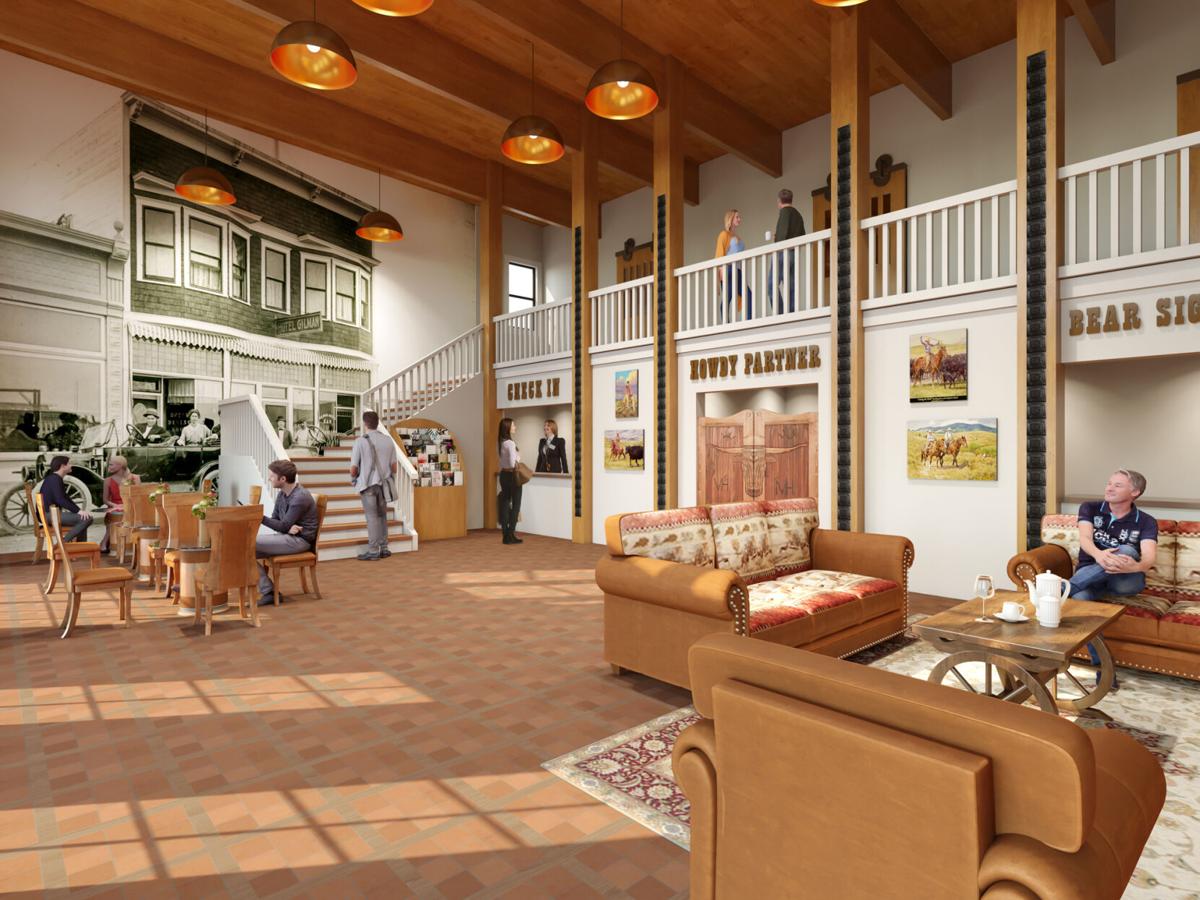 The lobby, along with the plaza in front of the Bunkhouse, can be used for gatherings, such as weddings and graduations. Note the mural, taken from an old photos of the Hotel Gilman on the south wall.

Matt and Lorie Folkman plan to start rebuilding the Bunkhouse in February.

The Bunkhouse will be back. And it will return in a grand fashion.

As a concrete foundation and a few remaining floorboards are all that remain of the Augusta icon that was destroyed by fire on October 10, 2020.

At the time of this writing, only three months have passed since that fire and current plans call for the rebuild to begin in mid-February with an opening in time for the 2021 Augusta American Legion Rodeo.

When the October fire struck, owners Matt and Lorie Folkman began the process of calling guests who had already reserved rooms for the 2021 rodeo. One of those guests is Steve Erban, an architect out of Minnesota.

Matt told the Sun Times that Steve and some of his friends from around the country fly into Montana to attend the Augusta rodeo. When Steve heard about the fire, he told Matt that he attended MSU and was an architect licensed in Montana, and that he wanted to be involved in rebuilding the Bunkhouse Inn.

That “put everything on the front burner,” said Matt. With Matt’s background in design and construction, he said that he and Steve “speak the same language.”

Steve Erban told the Sun Times last week that the plan is not to duplicate the original structure that was destroyed. What we were accustomed to seeing was quite different from the original building. When the hotel was originally constructed, there was no balcony. Other changes were made over the years as well.

“The original design was superior,” said Erban. And while the designer of the original Hotel Gilman has not been identified so far, Erban says that it was a grand design.

Gilman was named for Luthene Clairmont (L.C.) Gilman, an attorney from Spokane, Washington. In 1903, Gilman, who had been planning to run for governor of Washington, when he was tapped to take the role as counsel and trial attorney for the Great Northern Railroad.

By late January of 1909 Gilman was appointed as assistant to Great Northern’s Preident, L.W. Hill.

On September 30, 1911, the Great Falls Tribune reported that Gilman, along with Great Northern Chief Engineer A.H. Hogeland and R.E. Taft, engineer in charge of construction for the line, “arrived in Great Falls yesterday morning from St. Paul traveling in the private official car A2, “Manitoba.”

The story goes on to say that the visitors “left the city by automobile for a trip over the Sun River Line, now in course of construction, their expectation being to inspect the line all the way to Augusta.”

Steve Erban believes that the railroad would have spared no expense for a grand design for a new hotel to be built in a rail town named for his assistant.

Both Erban and Folkman say that there will be updates to meet current design codes.

The new Bunkouse will be raised slightly to meet code in an area prone to flooding, with a plaza in front where people can enjoy the view of Augusta.

People coming into Augusta from the south will recall that the old Bunkhouse dominated the view. The new Bunkhouse plans to use that to pay homage to another Augusta icon, the Augusta American Legion Rodeo.

A “ghost sign” is planned for the wall, plus a large mural honoring Alvin Nelson.

In August of 1952, Nelson, took first spot for saddle bronc riding at the fourth annual national high school rodeo that was held in Augusta. Erban said that Nelson went on to gain a reputation as one of the nicest rodeo cowboys on the circuit.

During the post-fire cleanup, Folkman said they uncovered glass tiles with a rippled, prismatic surface arranged along the top of the ground floor front walls. The feature is visible in the photo of the hotel when it was in Gilman.

Also recovered were some of the original floor. In the new hotel, some of that original wood will be incorporated into the new floor.

According to Folkman, another surprise was all of the original tin ceiling that was uncovered during the cleanup. While much of it was too damaged in the fire to be reused, enough was salvaged that it will be incorporated into the 12” X 12” wooden columns in the hotel.

'There's no excuse': Republican explains why he'll vote for impeachment

SE Cupp: Trump can say all the right things but it's too late

The lobby will be 20’ X 60’ with a ceiling height of 22 feet with a second-floor balcony overlooking. Two staircases are to be included, as well as a dumbwaiter that will move luggage from one floor to the other.

Upstairs will be three suites, about 600 square feet in size. Each suite will have a private restroom, and all three suites will have access to a west-facing balcony that will offer a view of the Rockies. Folkman said the rates for the suites will run about $200 per night.

Downstairs there will be nine rooms, also with private baths. “Those rooms were our biggest seller,” said Folkman. The room will go for $130 a night.

Both Erban and Folkman said they plan to begin construction by mid-February, and both said that the county and the state have been supportive.

And while the mild winter – so far – may bring hope of a speedy construction process, it seems that both architect and owner/builder are determined to have the Bunkhouse up and running in time to provide accommodations for those attending the 2021 rodeo.

To meet the short construction time frame, many of the components will be pre-built and delivered, ready to be installed. The floor system for the second floor will use a wood laminate that is, in itself, structural, meaning that floor joists are not required. Some of the walls on the lower floor are to be made of concrete, which offers fire protection and will support the upper floor.

Beams used in the structure will also be made of a wood laminate.

Whenever possible, Folkman and Erban are sourcing components and materials from Montana, and when the construction begins, Folkman plans to use local workers whenever possible.

People along Augusta’s Main Street are excited about having their downtown hotel back. Tammy Dellwo, who serves as president of the Augusta Area Chamber of Commerce told the Sun Times: “We’re so happy! Having the Bunkhouse back will benefit the whole town.” She added, “You don’t realize what you have until its gone.” Dellwo also operates the Buckhorn Bar across the street from the Bunkhouse, and she said that the Bunkhouse had a lot of customers come into the Buckhorn.

Also across the street from the Bunkhouse is Lone Wolf Gallery, the gallery of famed Augusta photographer and philosopher Gus Wolfe, told the Sun Times, “The Bunkhouse means the world to Augusta, it’s been missed.” Wolfe went on to say that he had spent a lot of time in the Bunkhouse years ago. “The owners back then would let me come and ago when I needed a place to stay in Augusta.”

Candi Shalz with the Western Bar told the Sun Times, “What started out as a fun filled sunny day to celebrate the Augusta Elks’ homecoming turned quickly after the parade and coronation into pure heartache.

It was shortly after we were on the road to Sun Canyon Lodge to have lunch before the volleyball game that we received the phone call that the Bunkhouse was on fire.

We turned around to head back to town and saw the beginning of the devastation.  We walked down main street to look at the sadness and  ran into Matt and Lorie.  All I could do is hug Lorie and cry with her.

We will miss the original Bunkhouse, but we look forward to the new one being constructed.  We are so thankful for Matt and Lorie being part of our community and rallying to build a new and beautiful building.  We have had a donation can at the Western (Bar) since the fire and will continue to add money as they progress in building.”

Matt Folkman, while being interviewed for this story, spoke with emotion about how Augusta has rallied around his family and the Bunkhouse. He spoke of how people volunteered to help clear the debris.

Among the finds were two albums. One is a collection of documents related to the Bunkhouse; the other is an album of photos. As the interview winds down, Matt brings both albums out.

They were still wet. They were charred badly, and the smell of the fire permeated the pages. Folkman lifted a baggie full of color prints. Part of the baggie had melted and the photos were still soaked. The prints are recent and were still in good condition, all things considered. Matt said that it is the first time he’s had a chance to look at the albums.

Digging deeper into the album, the pages are plastic, and the outer edges of the plastic had melted together in the heat. He pulled out a sharp construction knife and carefully cut the plastic to expose old photos and old magazine articles about the Bunkhouse.

Among the finds were more old photos from the hotel’s early days in Gilman. A front-on photo of a group of people gathered in front of the hotel for a group shot.

What Matt, Lori and Steve Erban have planned will pay tribute to Augusta – the community and its history – for the next century.

The thought, planning and investment that are being put into the Bunkhouse reconstruction is something that not only the community of Augusta can take pride in.

It is an undertaking we all can be proud of.