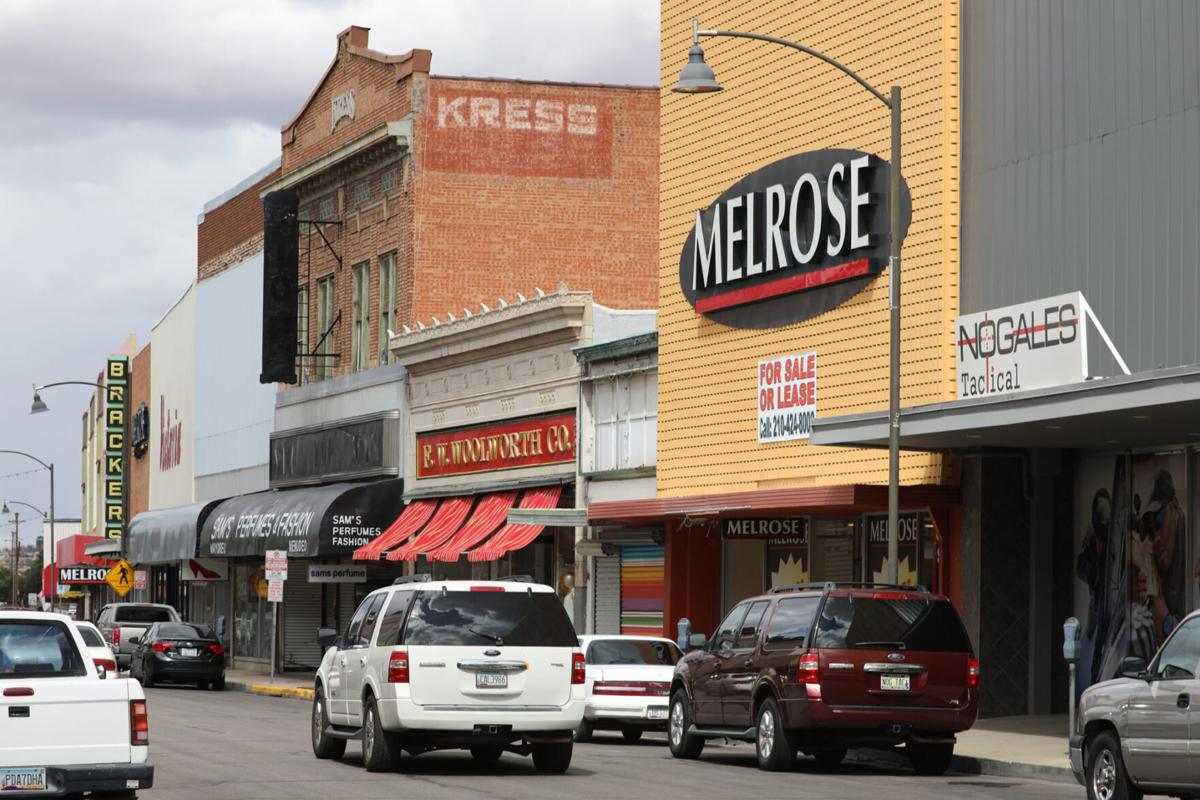 After COVID-19 cut Nogales’ 2020 season short, the city is excited for the return of baseball. (Photo by Alina Nelson/Cronkite News) 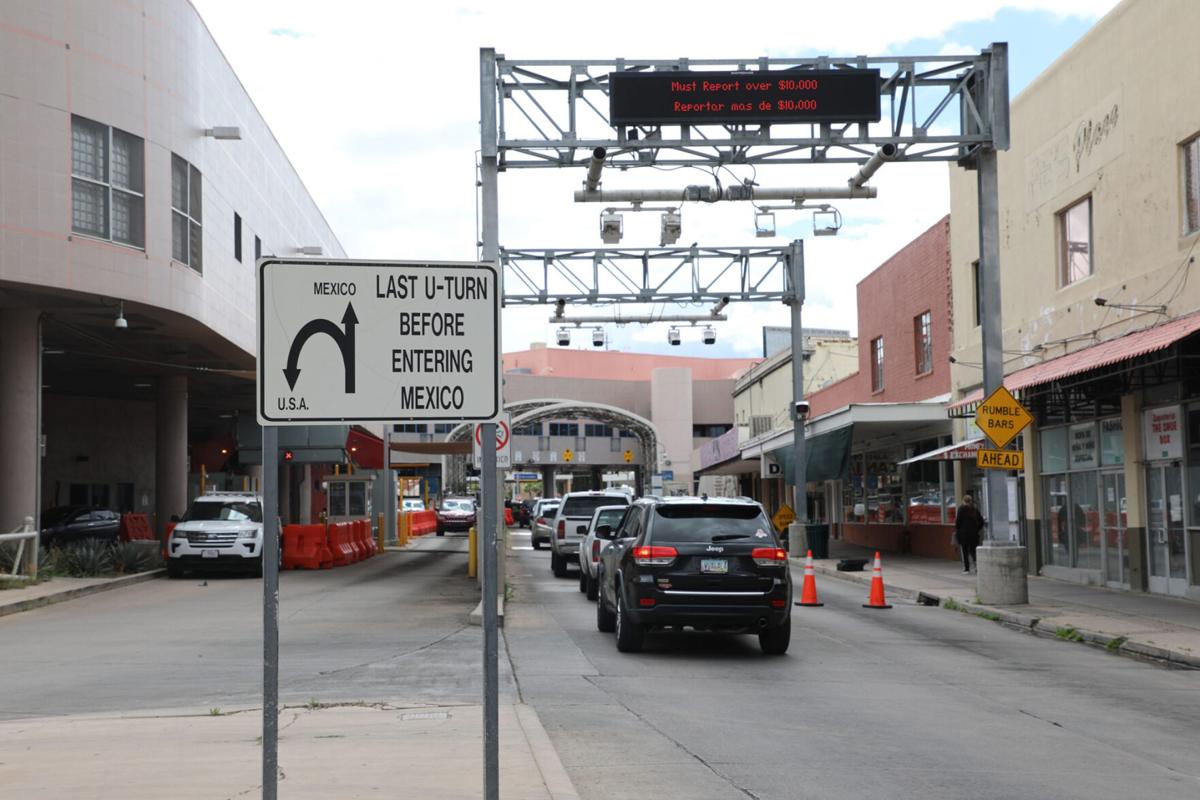 A sign warns drivers that it is the last opportunity to turn around before crossing the border into Mexico from Nogales, Arizona. (Photo by Alina Nelson/Cronkite News) 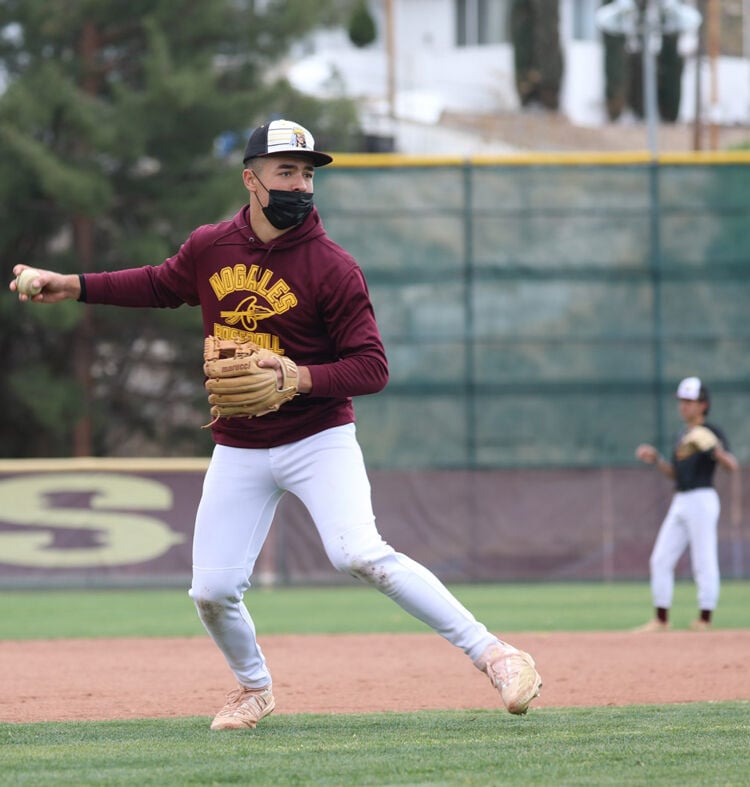 Nogales short stop Demetrio Crisantes committed to play for New Mexico State. The high school junior is one of many DI commits on the team. (Photo by Alina Nelson/Cronkite News) 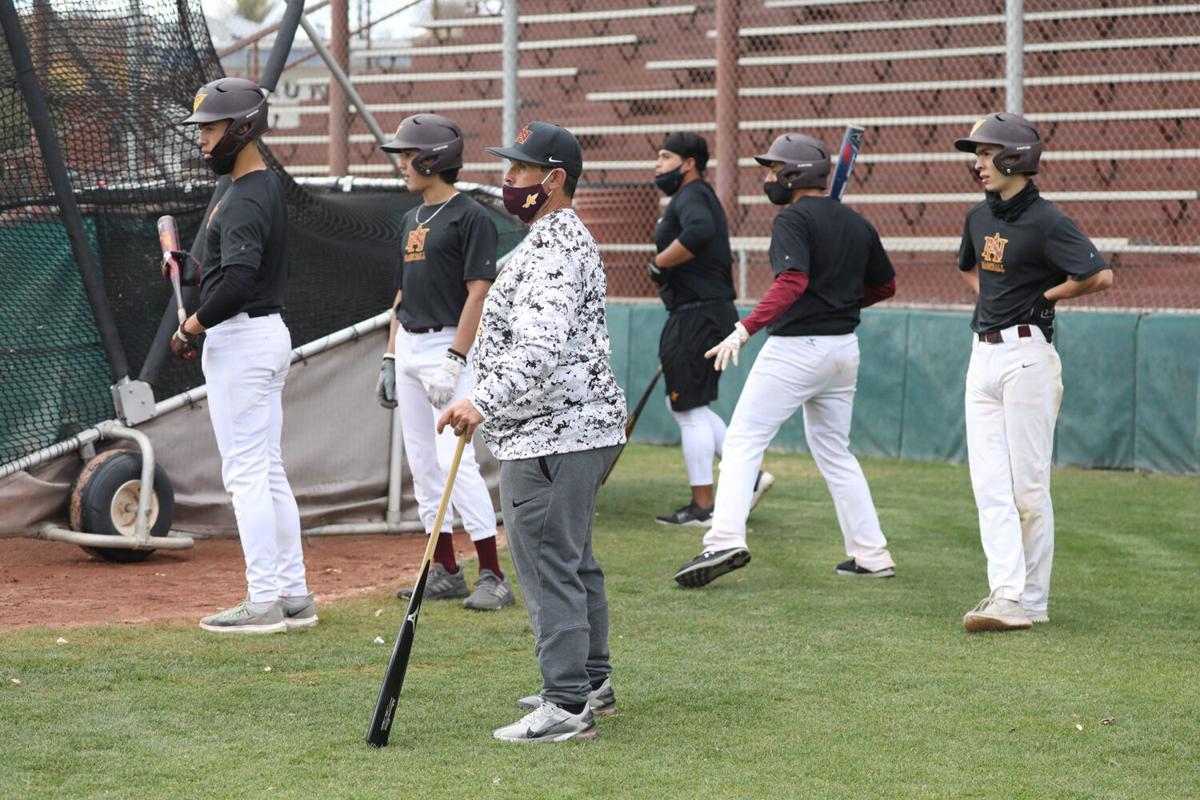 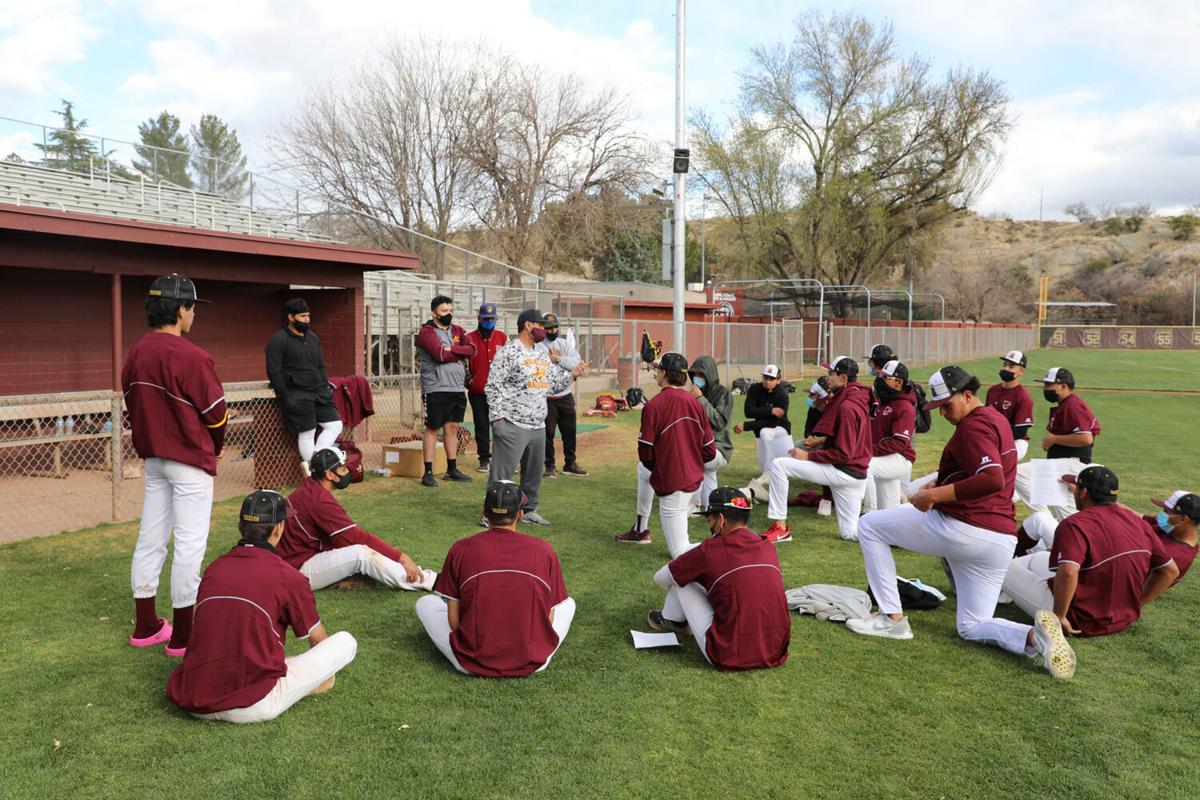 The Nogales Apaches are undefeated so far this season, with a 4-0 overall record and a 1-0 conference record. (Photo by Alina Nelson/Cronkite News) 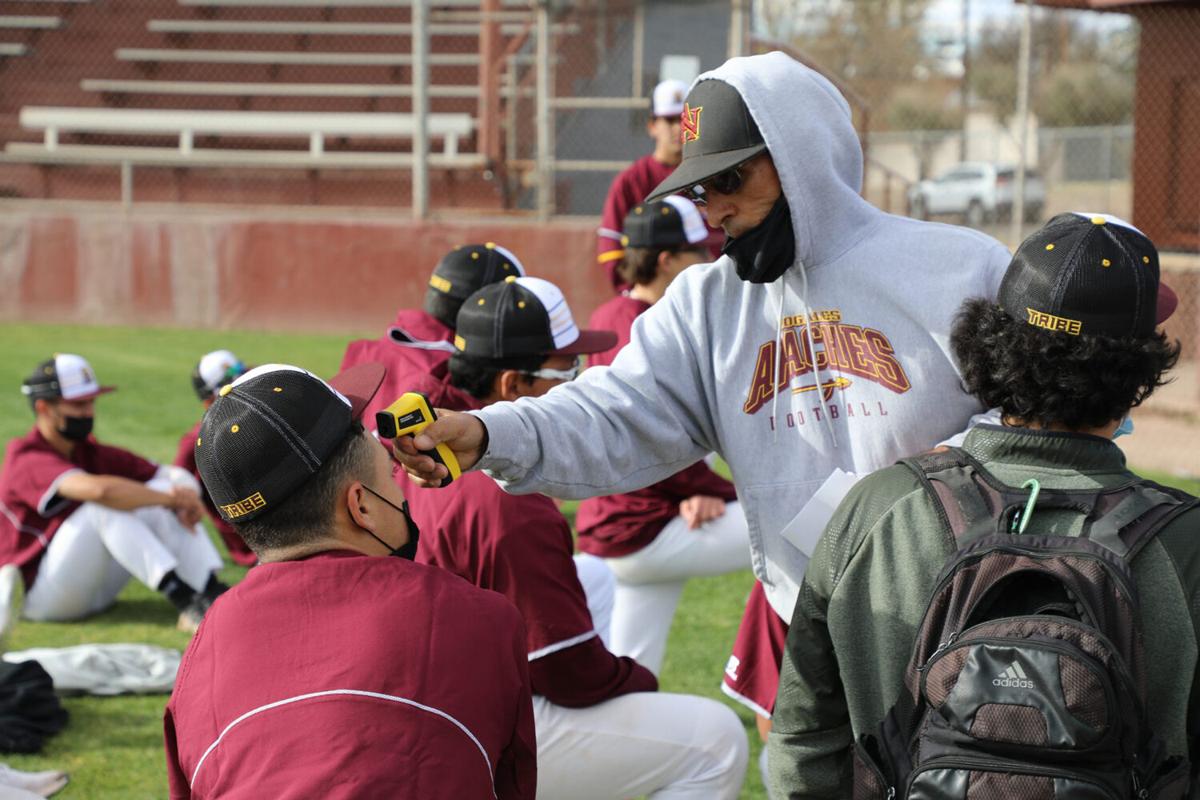 Before leaving Wednesday’s practice, all players must get their temperature checked in preparation for the game the next day. (Photo by Alina Nelson/Cronkite News)

The Nogales Apaches won the Arizona 4A Baseball State Championship in 2018, and the team is on track for another championship appearance this season with a 4-0 overall record. (Photo by Alina Nelson/Cronkite News)

A fence covered in barbed wire separates Nogales, Arizona, and Nogales, Mexico. Both communities have a passion for baseball. (Photo by Alina Nelson/Cronkite News)

Get to know the Wisconsin Badgers' 2022 football recruiting class

Stories, videos and podcasts covered all the action …

The University of Wisconsin football team has been c…

Over two and a half hours away and 180 miles south of Phoenix lies a border town roughly 4,000 feet above sea level that is often graced by blue skies and a warm sun.

A community of nearly 500,000 strong divided by a wall is also bonded by Mexican culture, family and heritage.

More than 20,000 people live in Nogales, Arizona, while an estimated 400,000-plus reside in Nogales, Sonora, Mexico. It is one of the largest ports of entry in the entire state that drives the maquiladora and produce industries.

“We have the opportunity to go into Nogales, Sonora, anytime we want to,” Nogales Mayor Arturo Garino said about a border that remains open for essential crossings. “The people from over there come over here. … We’re located in a great place. The scenery, the mountains and the history of Nogales.”

During a time when the fate of asylum-seekers in border towns are dominating headlines, this community is looking to America’s pastime, baseball, a sport the town believes can help it heal during the COVID-19 pandemic.

From Little League to the intermediate levels to high school, the city of Nogales is passionate about its baseball. It’s a rich tradition that involves many families and the community loves to follow its local teams.

The kids are different. The competition is intense. The entertainment is exciting. And it has resulted in success.

The Nogales Apaches are a perennial championship contender in Arizona. The high school has won 11 state championships dating back to the 1950s with numerous runners-up. More recently, the school has made the state championship three consecutive years, winning back-to-back AIA 4A state titles in 2017 and 2018 and placing runner-up in the 5A title game in 2019.

As Favela likes to put it, the high school program takes pride in its minor league system for its consistency and championships.

“It’s a community effort,” said Favela, who is entering his 16th year as Nogales High’s coach. “You have good programs at the middle school and then you have the high school program and one of the reasons why we’re successful is because it’s almost like having a minor league team. Here, the high school kids are the best we have to offer.

“All these people come watch the games and the little kids can’t wait to put that Apache uniform on. It’s a system and it’s worked for years and people just love the game of baseball.”

Junior shortstop Demetrio Crisantes, who is committed to play college baseball at New Mexico State, said he’s been playing with the same teammates since his tee ball days.

“I’ve been playing with them since I was 4 or 5 years old,” Crisantes said. “We’ve never separated from each other. … We’re like family. Each and every one of us, we’re all like family here.”

Compared to other cities that have baseball, that certain familial atmosphere within the players and coaches in Nogales is what makes it special.

“People always say that our team has a unique chemistry and I think it’s just because we’re together so much,” Favela said. “When other coaches ask me what the difference is, I say, ‘Your guys get in your car and you go home.’ We get on a bus and we go have dinner together and the kids clean up the tables. You teach them some things. You teach them some manners.

“Other people are in (a restaurant) and (we say) ‘Hey, let them go first.’ We got a line of 20 guys and a couple comes in and their faces drop and we let them go to the front and order their food. Just things like that, it’s just the way we’re brought up and we continue to teach our kids the same thing.”

For many high school ball clubs, COVID-19 took away the rest of the 2020 season, including Nogales’ season after a 6-1 start. But what made its story harder and more unique than most was that in the 2019 AIA 5A state championship game, Nogales fell to Horizon 7-4 in 16 innings in a five-hour, 35-minute contest. It is the longest Arizona high school baseball state championship game in history.

For next year’s seniors, 2020 was going to be the year for them to claim a championship they had just barely missed.

“I felt bad because those kids really for a year, it was a year in the making, just like every season is,” Favela said. “There was so much for them to prove and they were on their way doing that and then all of a sudden, it was just taken away.”

The loss of a season and the loss of baseball didn’t just impact the team. It affected the city and community as well.

“It was pretty tough,” Garino said. “It was tougher for the kids than anything else. For all of us, it was pretty tough because of the restrictions we got along the border. There were restrictions on travel for non-essentials from Nogales, Sonora. A lot of people could not come across – only if it was essential. So basically the city was shut down for a while and baseball was completely shut down for the whole year.”

For a city that depends on people from Nogales, Sonora, crossing the border and shopping in Nogales, Arizona – and providing 65% of the city’s sales tax, according to Garino – the pandemic made things extremely difficult.

“We lost almost everything this past year,” Garino said. “We had a hard time balancing our budget to be able to provide the services to the residents of Nogales … A lot of our stores were closed. A lot of our restaurants were closed. It was bad.”

The cancellation of the Little League season meant teams and visitors from all over the Western states would not be coming to Nogales, leaving the local hotels and restaurants in a tough spot.

“We are hoping that we can start negotiating and preparing for this year once everything is lifted by the CDC so that we can have that opportunity for these teams to come into Nogales and spend some time here and have a great time playing baseball,” Garino said.

With the local fields beginning to reopen and baseball returning to Nogales, it has brought the community something to look forward to in a year of great uncertainty. The game of baseball is bringing back a sense of normalcy to the city.

It hasn’t come without some bumps in the road. Nogales Councilman Jorge Maldonado said registration for Little League this year has been a bit slower than anticipated with the league normally receiving 300 to 320 signups. But they are currently at roughly 180, which is 60% of the usual participation. He believes the pandemic and other sports programs, like tackle football and soccer being pushed back into the spring, have contributed to the slow turnout.

Maldonado also said that Opening Day is tentatively scheduled for the weekend of April 10 and the league is still awaiting uniforms through the Arizona Diamondbacks Youth Jersey Program.

“If it’s three or four teams in each division, we’re going to go at it with what we got,” said Maldonado, an 18-year board member of Nogales National Little League. “We will have Little League in Nogales.”

To have the lights back on with the kids running around playing ball under the Nogales sky, the typical scenes of spring are refreshing for the Nogales Mayor to see once again.

“That’s going to be good to see because that itself is going to be another generating factor of life along the border and a release from this COVID pandemic,” Garino said.

While only two parents per player are permitted for home games at Nogales High, games will be live streamed on YouTube. If fans don’t want to watch online, they can try and sneak a peek from outside the stadium behind the fence.

Whether online or in-person, it won’t matter. They just want to see what’s happening at War Memorial Stadium, the home of the Apaches.