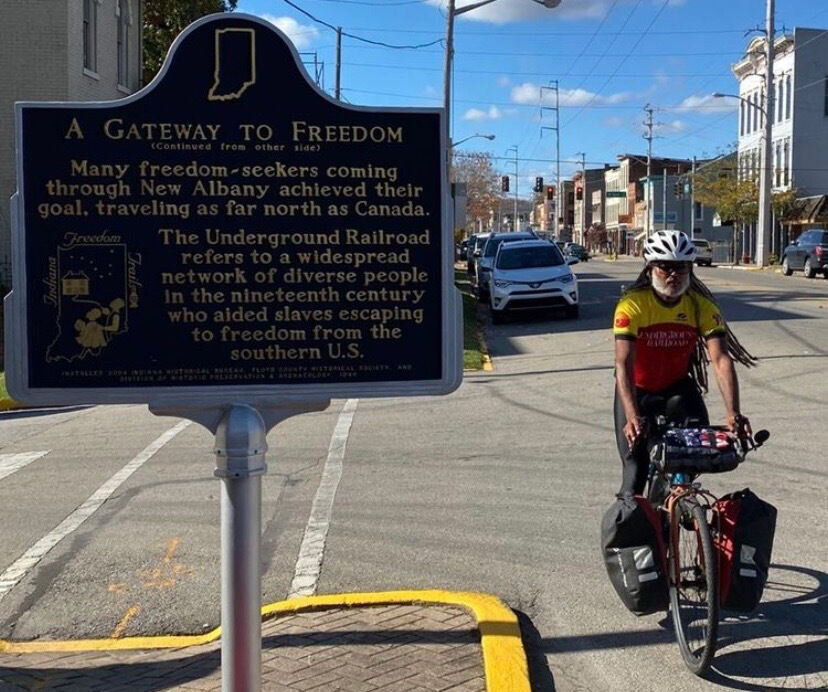 New Albany, Indiana, especially the church known then as the Town Clock Church, was an important resource for slaves who were searching for freedom. (Photo courtesy of Erick Cedeño) 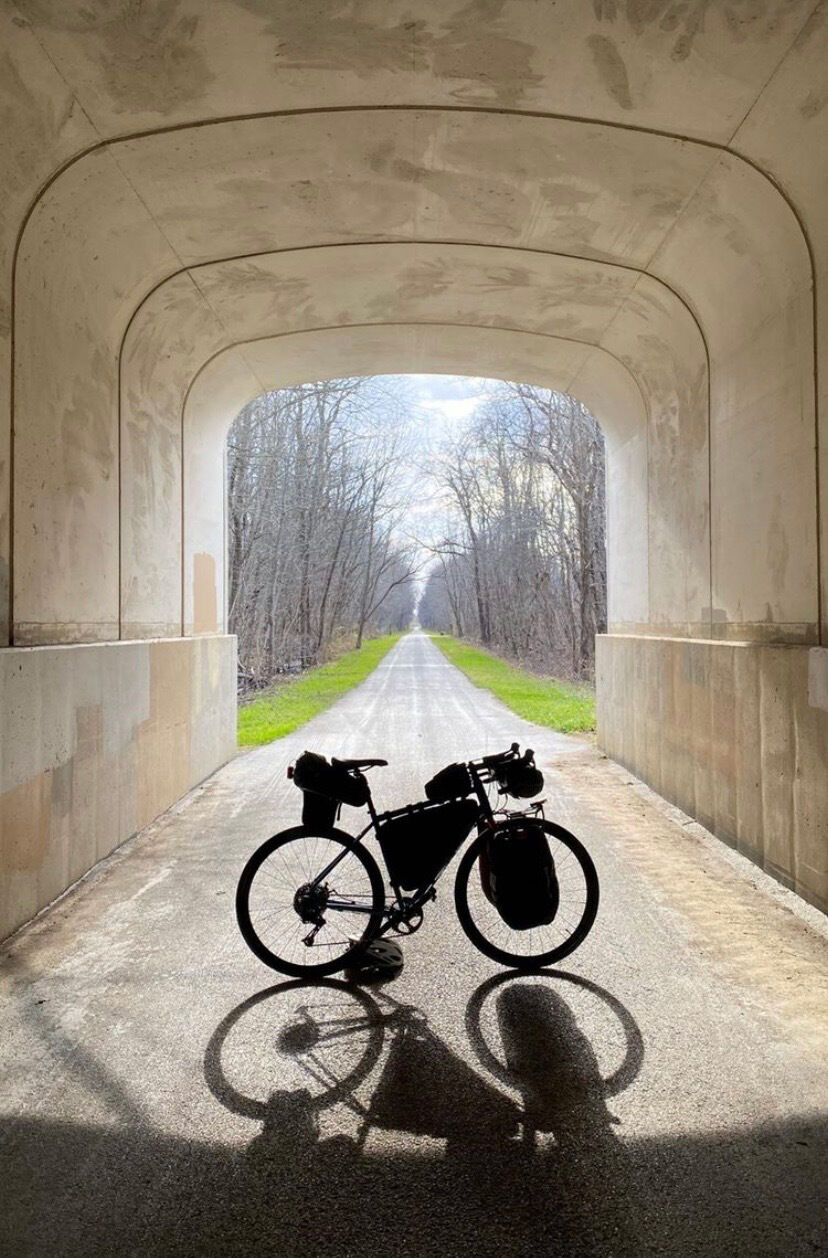 Erick Cedeño has twice cycled 2,200 miles to follow the path of the Underground Railroad because he “wanted to see what it felt like.” (Photo courtesy of Erick Cedeño) 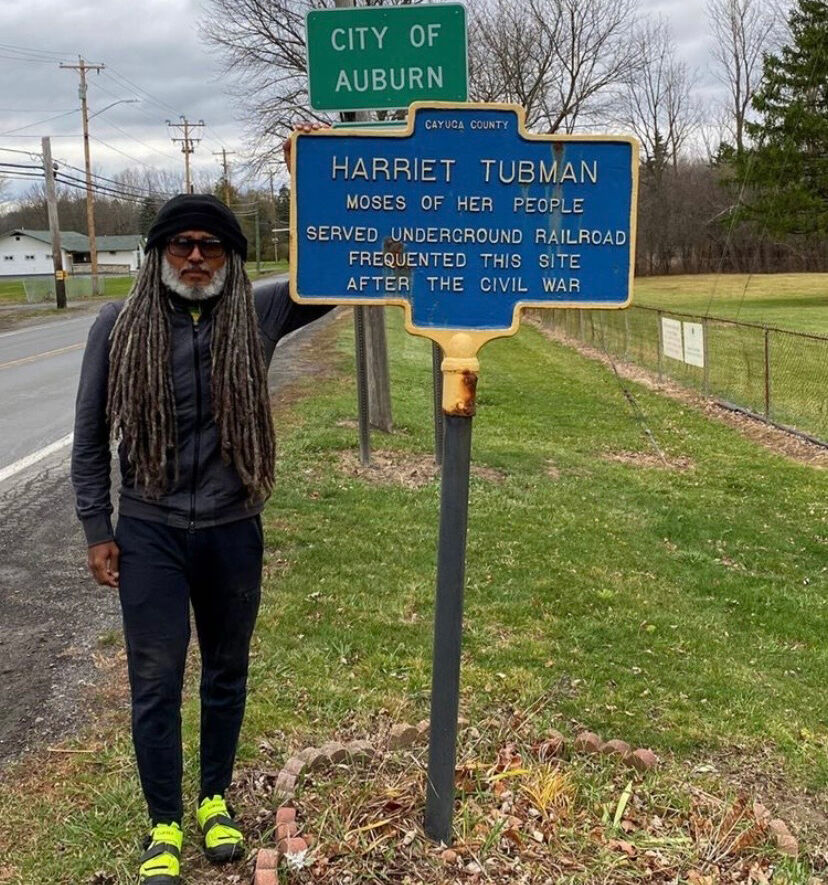 Harriet Tubman lived in Auburn, New York, for more than 50 years, where she continued to be an advocate for abolition. Cedeño stands by a sign honoring her. (Photo courtesy Erick Cedeño) 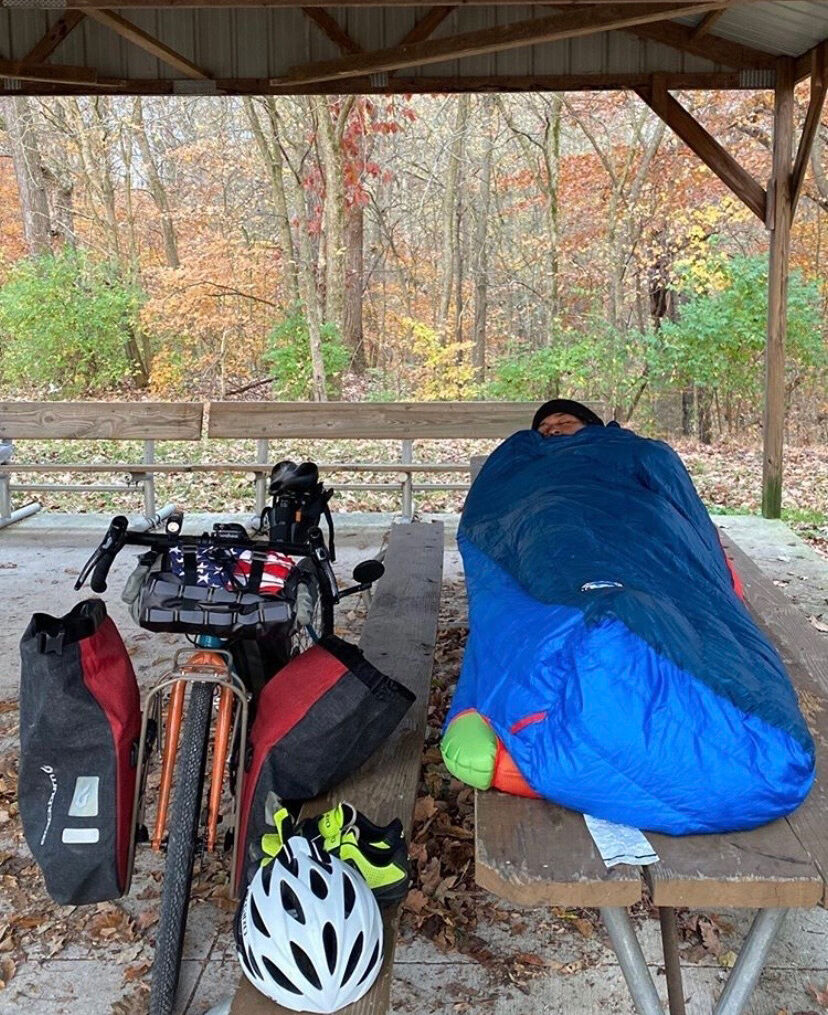 Cedeño believes traveling by bicycle is about “learning to be comfortable outside your comfort zone.” (Photo courtesy of Erick Cedeño)

New Albany, Indiana, especially the church known then as the Town Clock Church, was an important resource for slaves who were searching for freedom. (Photo courtesy of Erick Cedeño)

Erick Cedeño has twice cycled 2,200 miles to follow the path of the Underground Railroad because he “wanted to see what it felt like.” (Photo courtesy of Erick Cedeño)

Harriet Tubman lived in Auburn, New York, for more than 50 years, where she continued to be an advocate for abolition. Cedeño stands by a sign honoring her. (Photo courtesy Erick Cedeño)

Cedeño believes traveling by bicycle is about “learning to be comfortable outside your comfort zone.” (Photo courtesy of Erick Cedeño)

PHOENIX – The Underground Railroad offered enslaved people in the late 18th century a chance at freedom. Some 200 years later, cyclist Erick Cedeño retraced their steps on wheels, seeking his own freedom.

Cedeño first rode the trail in 2014 and completed the 2,220-mile journey from New Orleans to Niagara Falls again in November.

“I wanted to retrace the history of the Underground Railroad because I wanted to engage myself in the experience,” Cedeño said. “I wanted to see what it felt like.”

He also goes by “Bicycle Nomad,” a brand he created to share wisdom he’s gained from biking especially because there aren’t many Black cyclists like him, he said.

He detailed his entire trip on social media using his platform of over 28,000 Instagram followers to underscore the significance of the Underground Railroad.

Freedom seekers heard about the path by word of mouth and were guided by “conductors,” usually free Blacks or supportive whites, Simpson said.

Cedeño followed the route mapped out by Adventure Cycling. It follows the song “Follow the Drinking Gourd,” he said. Lore has it that enslaved African Americans hummed the song to each other while working on plantations, secretly communicating about the Underground Railroad.

Where the great big river meets the little river.

The old man is waiting to carry you to freedom.

Cedeño said he kept that song in mind when initially planning his trip. With that song and his biking experience, he knew he could follow the steps of those striving for freedom.

The arduous route was difficult for enslaved African Americans to make, especially in groups.

Though there were some cases where multiple people escaped together, Simpson said, “people were shipped north in boxes as if they were luggage.”

Thousands took the risk and headed north despite laws like the Fugitive Slave Act of 1850 that required enslaved people to be returned to the holders by law if found in a free state.

The trail included tunnels where freedom seekers attempted to avoid bounty hunters. Cedeño stopped by a little church in New Albany, Indiana, with a basement holding multiple rooms that hid escapees and provided them shelter. He said there also was a tunnel connected to a hospital so nurses could aid sick or injured people.

“It’s one thing reading about it, but actually seeing it and touching the Underground Railroad,” Cedeño said, “that was one of my favorite experiences there.”

Simpson noted that commemorating physical locations where the Underground Railroad crossed serve as reminders of struggle for freedom and the institution of slavery.

He expressed this sentiment when speaking about historical locations of presidential homes or plantations. While it may be more pleasant to hear about plantation weddings or presidential upbringings, it doesn’t paint the entire picture of the good, bad and ugly.

“We also understand that in those homes, there are a lot of people who didn’t want to be there, and who risked serious consequences if they attempted to leave the control of their masters,” he said.

During the first excursion, he rode at night to mirror the experience of those fleeing enslavement, sleeping anywhere along the way – even behind a bush. This time around, a client hired Cedeño to help him make the journey. The man didn’t have much long-distance bicycling experience, so Cedeño made sure to find campgrounds and bike during daylight.

He said in 2014 he felt like he was the one escaping. This year, he returned as a conductor guiding another man to freedom.

He said his client felt reluctant to undertake the trip in the middle of a contentious presidential election in early November. He feared he might experience racism in Southern states whose history carries generational scars.

On the eve of their planned departure to New Orleans, he called Cedeño and canceled but joined him in the Big Easy a week later.

For a month they cycled through nine states, taking only three rest days. They spaced out the journey of more than 2,000 miles, averaging about 65 miles per day while spending six to eight hours a day in the saddle.

Each morning they would plan their route and decide which historical markers to visit over  coffee and breakfast.

Cedeño said the cyclists burned close to 4,000 calories each day, so they had to eat a lot. However, that wasn’t always an option. They rode through a town in Kentucky on a Sunday and everything was closed. The two managed to find a vending machine and biked about 45 miles fueled solely by iced tea.

It was in those moments when Cedeño truly remembered the freedom seekers who walked the same path and didn’t have food, much less a bike. But they hungered for freedom even more.

“You learn how to be comfortable outside your comfort zone,” Cedeño said.

To prepare for any conditions, Cedeño trained by riding on frigid, 25-degree winter days and on blistering, 115-degree summer days. His client wasn’t as seasoned as him.

The Southern ascension tested them both with more than 56,000 feet of total climbing. At times, they had to out-distance wild dogs chasing them. And on top of all of that, they ran into the remnants of Hurricane Zeta in Alabama. For two hours they rode through the heavy rain and wind on a narrow road, all with a flat tire that his client sustained earlier.

With approximately 600 miles left, his client again felt weary of the experience. Riding through Kentucky heading toward Ohio, which once bordered the slave and free states, he informed Cedeño he would be flying back home once they reached Cincinnati.

“‘I told him, ‘No, you can’t,’” Cedeño said. “‘You gotta keep going. You will see that when you get to Niagara Falls. Everything will make sense, everything will pay off.’”

Cedeño urged his client to trust him and the experience. It was convincing enough and they pedaled ahead.

Despite it being a great physical feat, a trip of this magnitude is 80% mental and 20% physical, Cedeño said.

In Alabama, he monitored the weather but Zeta had other plans. When he saw a storm coming in Buffalo, he knew they couldn’t get caught again. With only a few hundred miles left until Niagara Falls, they had to double up on miles to avoid a foggy snowstorm. They pedaled 75 or 80 miles in 30-degree weather in one day to out-pace the storm.

Two days before reaching their destination, his client felt the strenuous journey come to fruition. Cedeño remembers his client thanking him as he guided him through the miles.

Cedeño said he knew his client could overcome the physical and mental toll to see the greater picture, because he had experienced the same thing in 2014.

“The Underground Railroad is also called the Freedom Trail,” he said. “I hope he had a little freedom after we finished.”

After finishing the endeavor six years ago, Cedeño set up shop in downtown Phoenix opening Bicycle Nomad Cafe, nestled at the intersection of Second and Garfield streets.

The idea sparked from another Adventure Cycling path that starts in San Diego and culminating in Florida – with Phoenix sitting right on the route.

“It’s just to inspire people to travel by bicycle,” he said. “So they can see what I have seen, not only in the physical but in the metaphysic of seeing kindness and love from people.”

In March, when the country frantically quarantined due to COVID-19, he closed the coffee shop with the hope to open again in a few weeks. It never did. He said he couldn’t survive financially without permanently closing. His business joined many others as collateral damage to the pandemic.

Nick Mckissick, a mechanic at the Velo Bike Shop, where the coffee shop was housed, said riders still bike through the area looking for the cafe. Velo employees have to deliver the unfortunate news that it’s no longer operating.

“Him starting the Nomad Cafe with this idea of touring and a safe haven to come to … I think it was influential,” Mckissick said.

He met Cedeño in Miami just before Cedeño’s first Underground Railroad expedition. He said Cedeño looks to educate through cycling, and being a Black man, this journey was special to him.

“The climate that we’re experiencing right now, there’s no better time,” Mckissick said. “I think it all kind of just coalesced together really beautifully.”

A climate where millions have taken action demanding justice for Black Americans since the jolting murder of George Floyd at the hands of police in May.

Simpson noted that the very existence of the Underground Railroad is a repudiation of arguments that undermine the plight of African Americans in U.S. history.

“The Underground Railroad, at this point, both shows how far we as a nation have come from the days of enslavement, and how far we have to go in terms of realizing the promise of equality and liberty that all Americans claim as a national birthright,” Simpson said.

When Cedeño first planned to cycle the Underground Railroad, many warned him he might experience racism in the South. He said he encountered the opposite.

That’s when he realized he wanted to inspire others to ride, especially people of color, to experience the humanity he did. He sees more positive than negative and doesn’t worry about how others think of him.

“While I’m on the trail, this is my meditation,” he said. “This is the time that I took 30 days for myself to be a better human being.”

Biking is his freedom, his escape. He found it again on the Underground Railroad much like so many who sought it before him.