Ars gratia artis - “art for art’s sake” Old copies of the Sun Times wait to be consumed in the glazing process.

COVER PHOTO: As the last of the evening sun succumbs to the rise of the night, Andy Watson inspects one of two tea bowls - one for him, the other for his guest. 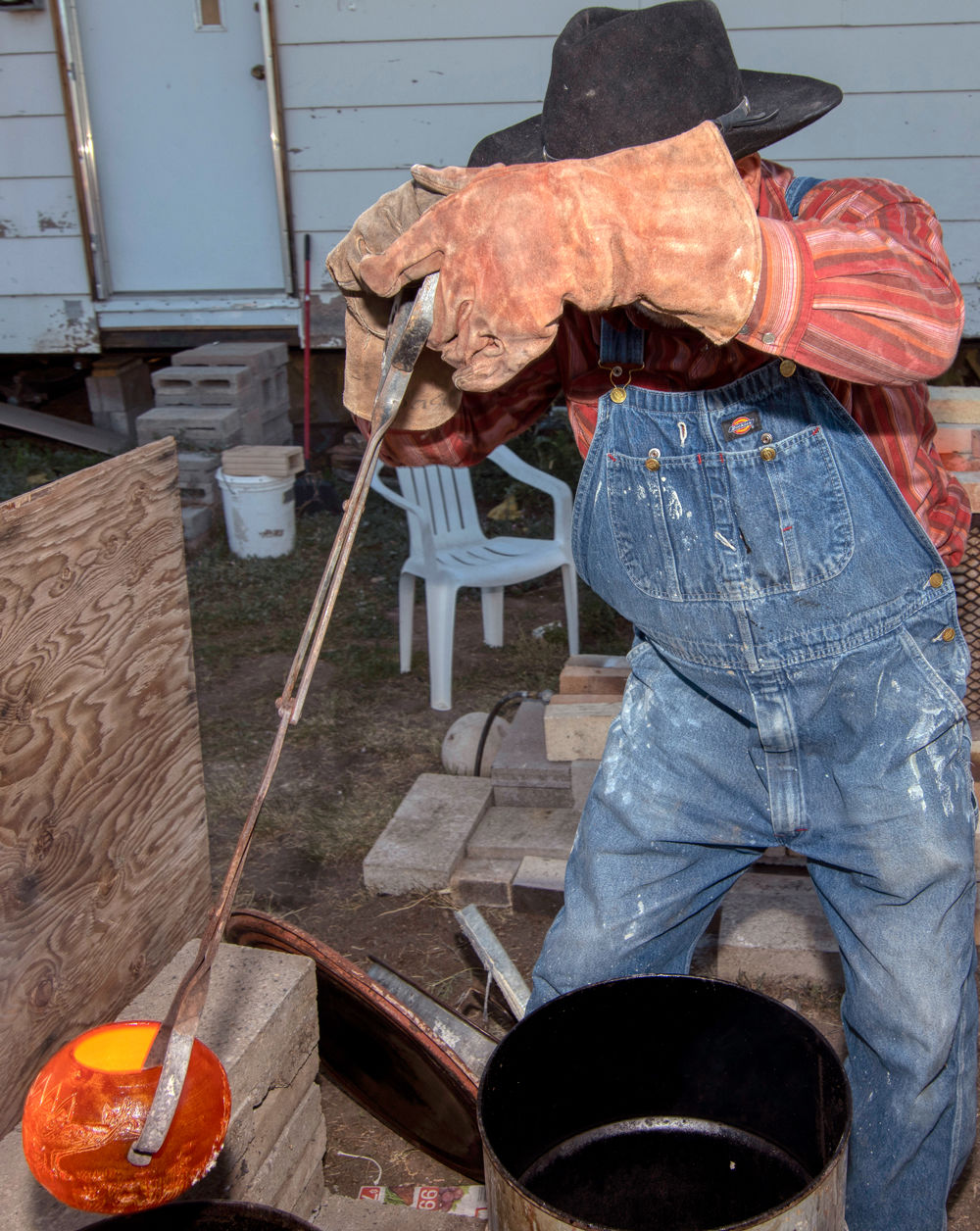 In the perfect setting for a pottery kiln - the outdoors of Montana - Andy Watson inspects one of his pieces destined for the 2018 Shadows of the Past Art Auction.

Photos from a candlelight vigil in honor of Selena N…

This story was originally published in the Fairfield Sun Times edition of September 6, 2018. It was re-posted to the new fairfieldsuntimes.com on July 16, 2019

I never really gave it much thought until I was standing on the south end of Crowe Bench last Friday, taking notice of the setting. But, then, I haven’t been around that many pottery firings before. The fact is, I can’t recall that I’ve ever had the experience before.

Local artist Andy Watson stopped by the office earlier, looking for some old newspapers that he could use when he pulled his pottery pieces out of the kiln. These are the creations Andy is donating to the 2018 Shadows of the Past fundraiser in Choteau.

Andy took every scrap of paper he could get his hands on and told me that he would give me a call when it came time to fire the pottery.

On Friday afternoon, after he called, I headed down to Watson’s kiln, which is tucked behind some farm buildings – among tractors and grain bins and golden fields. I had always assumed when I attended my first pottery firing, it would be in some downtown studio on a high-rise street. Soon, though, I realized that there could be no better place to witness the creation of artwork that is of the earth than to be outdoors, on the ground and in the elements, surrounded by farms.

Andy greeted me with the challenge that I was to glaze my own tea bowl. Apparently, there is some tradition with potters that a guest gets to throw something into the oven… I mean kiln. Thankfully Andy knew I was lacking in artistic ability, so he had done the hard work of changing a lump of clay into an unfinished tea bowl.  All that was needed was for me to apply the glaze and fire it up.

I can only describe my version of the glazing process as splash, brush, dip and sprinkle. I stressed over the small spots on the outside of the bowl that were unglazed. A newcomer’s mistake – the fired piece will just have a different color in that spot.

Andy glazes his pieces that are headed to the show, and puts several pieces, along with his tea bowl and my tea bowl, into the kiln. He keeps a close eye on the glowing clay, and when the time is right, with a pair of leather gloves and long tongs, he pulls each piece out of the fire. The glowing earthware is put into a bed of shredded Sun Times papers which ignite under the heat. Andy quickly covers the paper and pottery with a small metal barrel. After a short while, he pulls the pottery out of the container and puts them into a water bath to cool down.

When he has a moment, Andy fetches a jug of water from a building he is converting into a studio. He has no tea handy, but we are going to celebrate the day with a very brief version of a Japanese tea ceremony.

Andy explains to me that I should hold my tea bowl on three fingers, with my thumb barely touching the side. Before drinking the tea, I’m told to turn the bowl three times. With the water as a substitute, we go through the ceremony. Andy explains that our tea bowls, and the pottery he is firing for the auction, are of the Raku type.

To prepare for this story, I researched the Japanese tea ceremony. Did you know that there are different “schools” of thought in Japan on the proper tea ceremony? I could not even find a firm answer as to why you spin the bowl in your hand three times, but I did find out that some Japanese believe it is proper to spin the bowl only twice. And this debate over tea etiquette has probably been going on for centuries.

As Andy pulls the pieces out of the cooling water, I’m struck by how completely different, how individual, each piece of pottery looks. Every small variable in the process yields completely different results in the finished product. Some of the colors are earthy; others are bright, even pearlescent. One piece, in the light of a golden sunset, has a bottom that appears metallic.

But, there I was, on this flat bench of land on a perfect early fall day, with a good wind blowing. That is when it hit me – that this was the perfect setting.