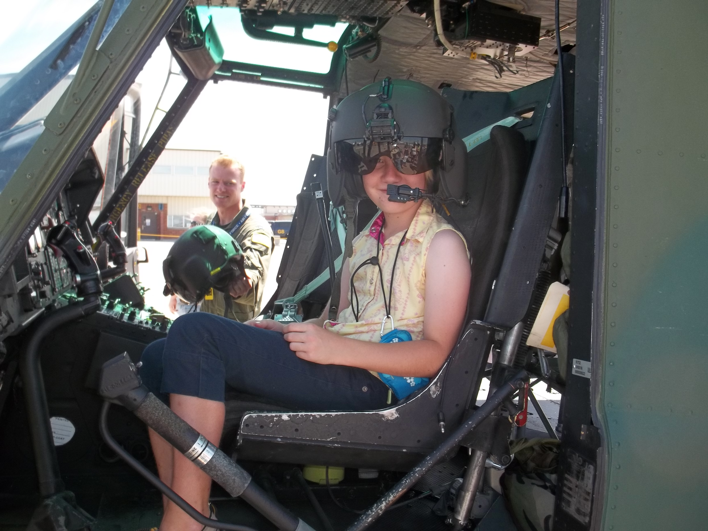 Berit Bedord, aged 10 or 11, check out a helicopter during a Blue Angels air show.

Berit Bedord, aged 10 or 11, check out a helicopter during a Blue Angels air show.

As part of the process, Berit was interviewed by a five-person board representing Senator Daines and Congressman Ganforte. She told the Sun Times that she felt the interview went well.

Rep. Gianforte told the Sun Times, “Berit is a talented student with excellent credentials, a background of leadership, and outstanding potential. I commend her dedication to serving our nation, and I’m proud to nominate her to a U.S. military academy.”

Asked for a comment, Senator Daines said, “From being President of her FFA Chapter, to earning a spot at the Honor Code program with the Air Force Academy, Berit has gone above and beyond as a young leader. I’m honored to give Berit my nomination to our nation’s service academies, and I look forward to seeing all that Berit accomplishes there.”

Senator Tester told the Sun Times, “Montanans know what it means to serve, and I’m extremely proud to nominate Berit to continue that tradition. Her background in martial arts and shooting sports, her excellence in the classroom, and her commitment to serving her community have prepared her well. I wish her luck as she pursues this challenge.”

Asked if she had a preference, Berit said her first choice was the Coast Guard Academy. “I like their science program; their humanitarian and environmental work.” During the summer, Berit attended a week as a basic cadet, or “Swab,” at the USCG academy, and even ran into another Montanan, a student form Butte, while there. Impressed with the week, Berit described it as a “team of pretty special people.”

Tipped off by her dad, Fairfield High School teacher Brian Bedord that Berit also had a passion for learning how to fly helicopters, we asked Berit about her interest in piloting “helos.” Berit was unable to stifle a broad grin as she said that when she was young, she would watch the Mercy Flight helicopters fly overhead. She still has a photo of her – when very young – sitting in the pilot’s seat of a helo. And recently, she had the chance to take a flight on a helo out of Malmstrom Air Force Base in Great Falls.

In addition to her strong academic record and community service through the FFA and 4-H, Berit is also quite a shot with a rifle.

Over the years Berit has shot with the local 4-H team. Andy Watson, who has worked with the 4-H shooters, told the Sun Times, “When I first met her and her little brother I was impressed at the level of concentration that they both brought to the practice range.  It is a pleasure to coach people who are so focused on the attributes that you bring forth to the level of athletic concentration that it actually hones the teacher’s skills to have such attentive people to work with.”

Watson continued, “My daughter Julia who was a Marine Markswoman gave a workshop at our local range and Berit was among others so remarkably focused on the lessons as she demonstrated the standing position.  Berit and her little brother Bryce seemed to always have in them the desire to train at a higher level of commitment.  Berit has an ability to listen, which is what carries her over the apex of the sport or object she is focused upon.”

Any organization, and especially any of the military branches, focus most on team spirit, or esprit de corps. Watson summed up his comments by telling the Sun Times, “Abraham Lincoln is supposed to have said that “Few people can stand success… another man’s, I mean.”  We need to become all that we can by leaving the limiting factor of self-praise and self-aggrandizement, Berit is for the success of all of team and that is what makes her so awesome.”

Berit is currently traing with the National Junior Olympics Shooting Team.She said that she expects to hear from the academies in the spring.