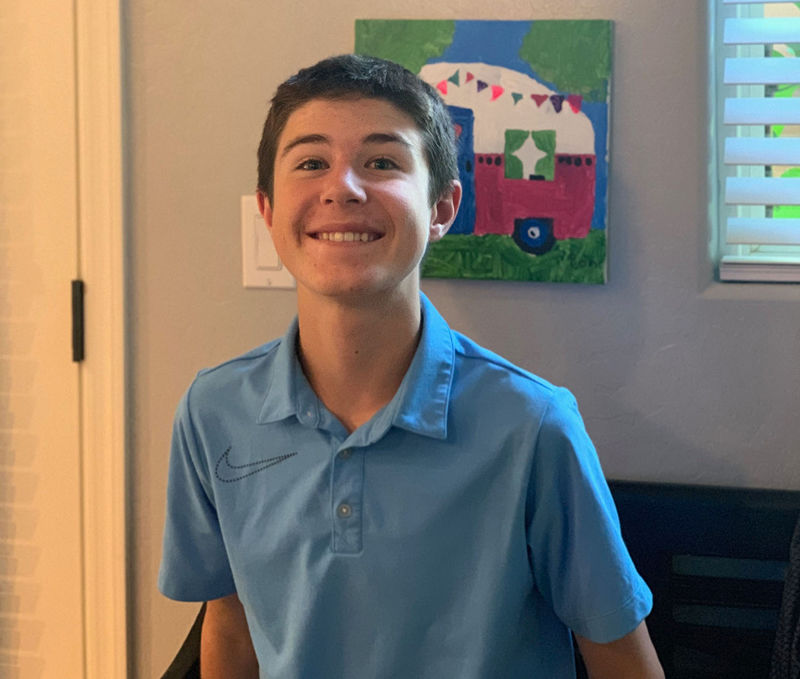 Ben Bonaroti has developed an interest in art. He painted the lovebirds artwork in his room. (Photo by Ashley Carter/Cronkite News) 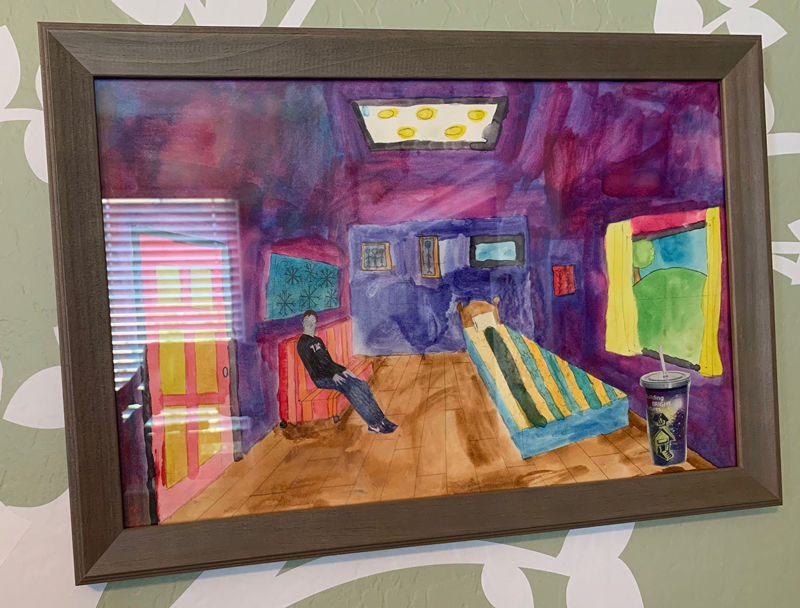 Ben Bonaroti drew “dream room” that is on the wall of his bedroom. (Photo by Ashley Carter/Cronkite News) 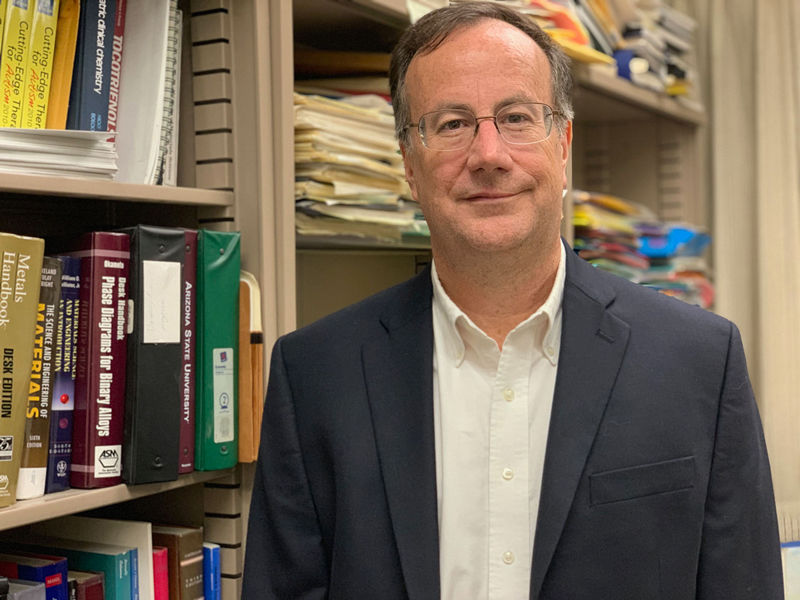 James Adams, a professor and researcher at Arizona State University, worked with his team to conduct microbiota transfer therapy to help reduce autistic and gastrointestinal symtpoms for people diagnosed with autism, (Photo by Ashley Carter/Cronkite News) 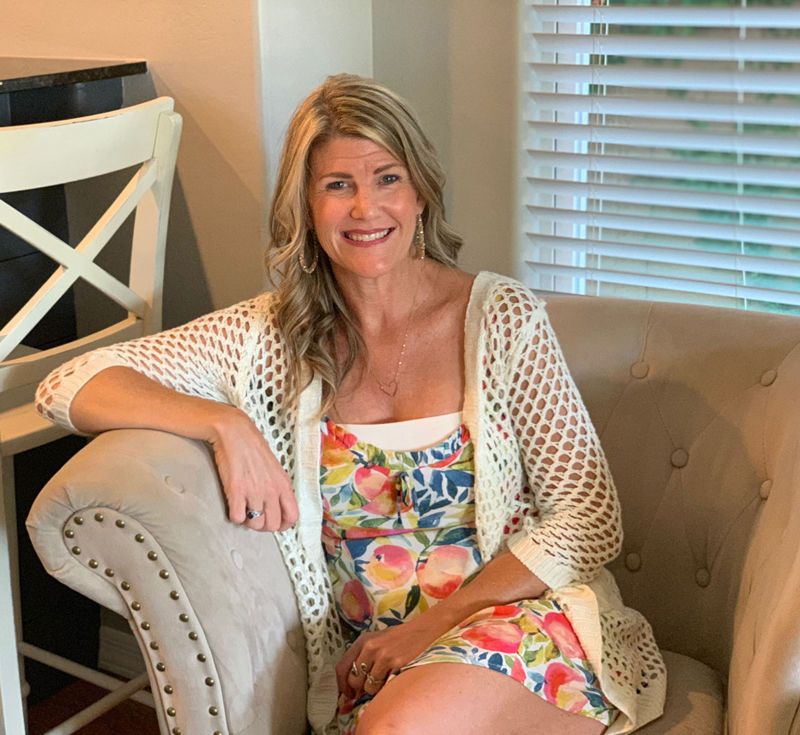 Heidi Bonaroti said the research therapy for her son, Ben, worked after other attempts to treat his autism and gastrointestinal problems had failed. (Photo by Ashley Carter/Cronkite News) 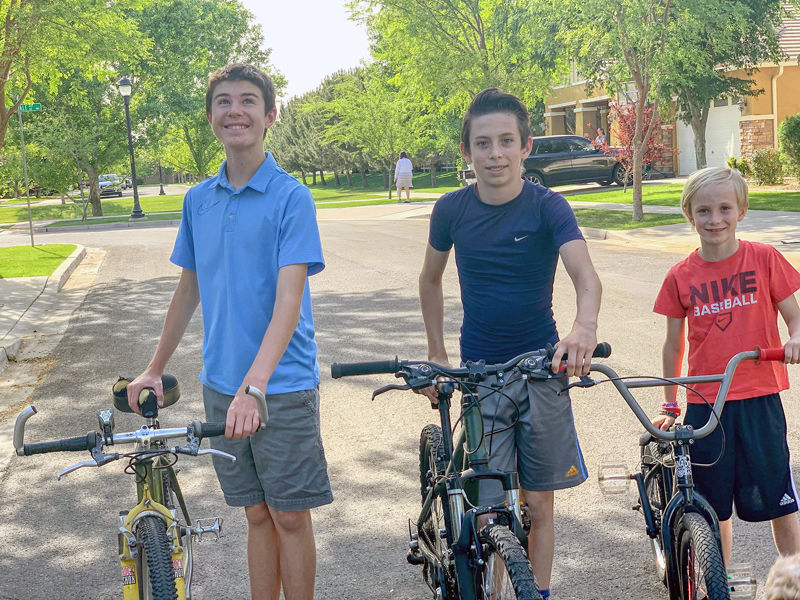 Ben Bonaroti and his friends Diesel Andrus, middle, and Asher Andrus, right, ride bikes, golf carts and wrestle together. Before a fecal therapy treatment, Bonaroti had trouble interacting with others. (Photo by Ashley Carter/Cronkite News)

GILBERT, AZ – On a sunny, warm afternoon, Ben Bonorati, 15, watches TV in a house brimming with his artwork, a few hours before it’s time to head to his beloved church youth group.

His mother, Heidi Bonorati, asks whether he wants to go outside to play with his friends from across the street. Ben jumps at the idea, and before long is pedaling his bike with his friends, Diesel and Asher Andrus.

Ben’s face beams. It’s a typical day for the teen, whose life is much different from how it was a few short years ago.

Ben was diagnosed with autism at a young age. He also dealt with gastrointestinal issues, a problem for 30% to 50% of people with autism, according to James Adams, who leads the autism/Aspergers research program at Arizona State University.

The family tried many treatments to help Ben.

“Anything that proved itself to be safe and effective, we wanted to try,” Heidi Bonorati said.

Potential solutions ranged from CBD oils to applied behavior analysis to a gluten-free and dairy-free diet. The results weren’t promising.

“Even though Ben seemed to be making progress on diet and various supplements, it was very slow,” she said.

She said Ben still had visual stimming – repetitive movements like hand flapping – meltdowns and gastrointestinal issues, including bloating and diarrhea. After being referred by another doctor to Adams, the family went on a journey that would change Ben’s life.

How Dr. Sanjay Gupta is keeping his family safe from Covid-19 this holiday

“What we think is happening is that by healing their gut, now their brain is in better condition, it’s a healthier brain and now it can learn – learn language, learn social skills, learn behavior – so those kids can start catching up to their peers,” said Adams, whose daughter’s autism motivated him to seek new treatments.

Fecal therapy is in the second phase of a Food and Drug Administration trial that tests it on adults. Adams said the results so far have been good, and two participants in their 20s now have their first girlfriends.

If the second phase of the FDA trial goes well, Adams said, they will embark on a third trial. If all three trials are successful, the treatment will be available to the public in several years.

The therapy healed Ben’s gastrointestinal issues and reduced his autism symptoms faster than any previous treatment, according to his family.

“The hand flapping disappeared, the visual stimming was gone,” Heidi Bonorati said. “All of his autistic symptoms and behaviors are nonexistent.”

Ben’s earlier score on the Autism Treatment Evaluation Checklist was a 107 out of 180, 180 being severe, his mother said. Now, his score is 3, and Ben is working on expressive language skills.

He developed a love for art, which his parents hang in his room and elsewhere in the house. He enjoys wrestling with his friends and riding around in their golf cart, and texting his girlfriend. His mother said before the therapy, Ben did not interact much with others.

Now, he said, he wants to be a doctor.

This story was posted to fairfieldsuntimes.com

Sorry, there are no recent results for popular images.