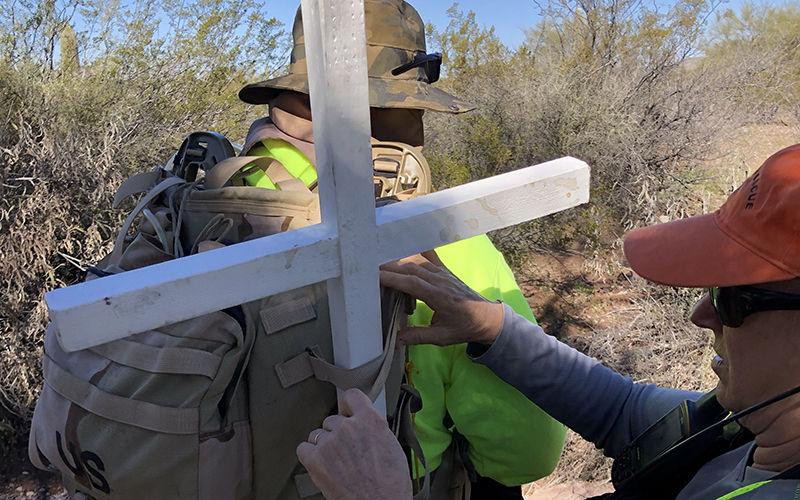 Kathy Albrecht places a cross in Francisco Lemus’ backpack. The cross is planted in the event a body is found. (Photo by Austin Westfall/Cronkite News) 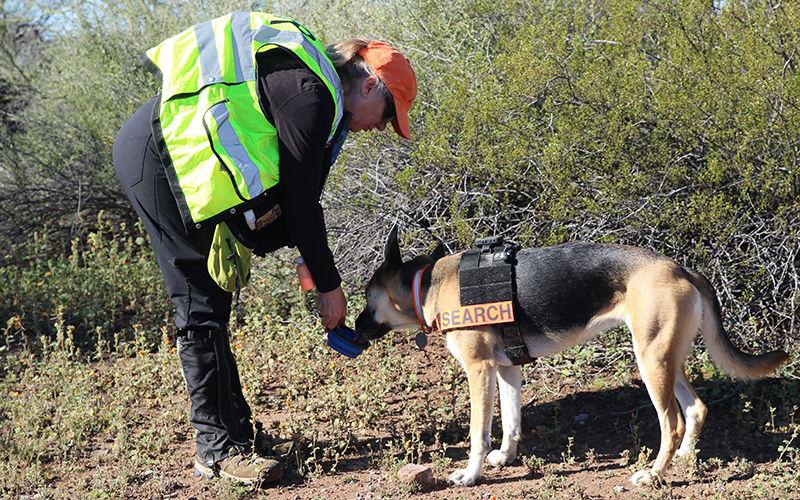 Kathy Albrecht and her 3-year-old German shepherd mix, Mesa, were among the six canine teams that took part in February’s search. Before joining Aguilas del Desierto, the pair helped in search efforts after the deadly Camp Fire in Paradise, California, in November. (Photo by Austin Westfal/Cronkite News) 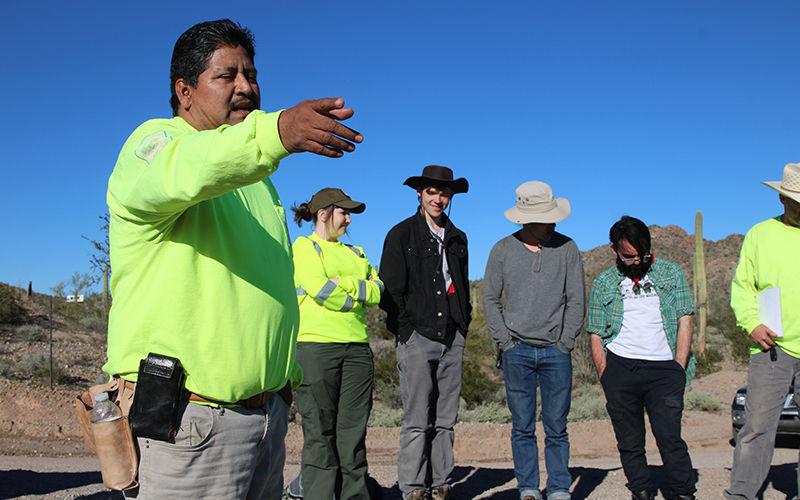 Aguilas del Desierto president Eli Ortiz leads a group debrief after a search in February. Ortiz founded the group in 2009 after his brother and cousin died while crossing the desert. (Photo by Austin Westfall/Cronkite News) 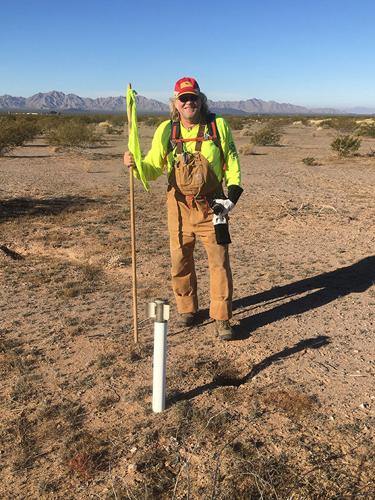 Henri Migala poses with an unexploded ordnance while performing a search at Barry M. Goldwater Air Force Range. The group found eight bodies during one search on the range in December 2018. (Photo courtesy of Henri Migala) 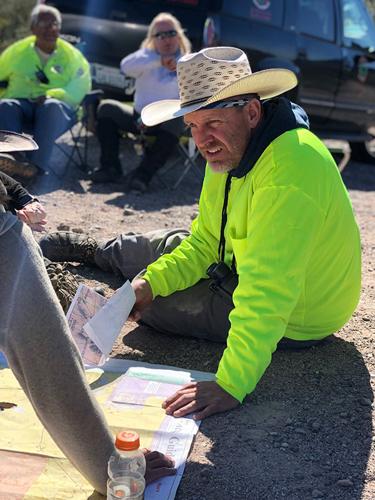 Flagstaff resident James Holeman helps map out the group’s next search. Holeman is one of two Aguilas del Desierto volunteers that are from Arizona. The rest live in either San Diego or Orange County, California. (Photo by Austin Westfall/Cronkite News)

A selection of farming photos from around the region…

SOUTHERN ARIZONA – One works at a college, another runs an Airbnb. A third works with landscapers and contractors.

But once a month, the three have one thing in common: They search for the remains of migrants who died trying to cross the southern U.S. deserts.

Aguilas del Desierto is a nonprofit group in San Diego that organizes the monthly search efforts.

January marked the seventh straight month Henri Migala took part in the searches. He has a background in international humanitarian aid work, and found out about Aguilas del Desierto after the group popped up on his Facebook feed.

“I reached out to them, contacted them, they were instantly very welcoming and very warm and very appreciative of my interest,” he said. “I came out on a search and I’ve been doing it ever since.”

Migala is the director of the University of San Diego’s International House, a campus organization that pairs international students with U.S. students so they can room together.

His humanitarian work, however, is his passion.

“We’re not bringing happiness to people when we find these remains, but we do bring closure to some families who are anguished,” he said.

Most of the families of missing migrants reach out to the group for help through its Facebook page. Group volunteers said the calls to search for a missing loved one have increased in recent months as a flood of mostly Central American families has surged toward the border.

According to U.S. Customs and Border Protection, 92,607 people were apprehended between ports of entry in March. That number was 66,884 in February and 47,984 in January.

As long as migrants try to cross the deserts, there will always be those who do not make it.

Humane Borders, a humanitarian organization that aims to help and protect migrants, worked in conjunction with the Pima County Medical Examiner’s Office to map out the locations of all migrant remains that have been discovered by Border patrol and such groups as Aguilas del Desierto.

Aguilas officials declined to reveal search locations but said many of the remains are found in the most barren areas of southern Arizona.

“Some of our guys get hurt so bad, we’ve got to get them out because they step into a cactus or fall or trip,” Migala said.

Volunteers said the challenging conditions and terrain are not deterrents. For them, this is a mission.

“I think this is just the right thing to do,” Migala said.

The group was started in 2009 by Eli Ortiz of San Diego after he lost two family members to the desert.

“A human trafficker left my brother and cousin behind at the Barry M. Goldwater Range” in southwestern Arizona, Ortiz said through an interpreter.

Ortiz wanted to search for his family but needed help to make the dangerous trek. He contacted local Mexican consulates and police agencies without luck. He eventually got in touch with a group called Angeles del Desierto that performed organized searches.

“It was four months later when we found the two bodies,” said Ortiz, who works full time as landscaper in San Diego.

After finding his brother and cousin’s remains, Ortiz knew he wanted to help others in similar situations, so he founded Aguilas del Desierto.

“Everytime I’m out here, I go back to the same moment I was looking for my brother and cousin. It reminds me of what I went through at that time,” he said.

Stephanie Ortiz said the long drives out to the search locations are a good opportunity to think about the kind of work the team does.

“We have six-plus hours to get here, and in that span of time, you’re mentally preparing yourself because it’s a really intense psychological experience to be looking for people’s remains,” she said.

Gerardo Campos, the group’s communications director, explained the impact searching for a potential body can have.

“We get emotional but not in a bad way, you know, it won’t hurt us, I think. I think it’s going to help us to grow as human beings,” Campos said.

When Adults Sign Up for Medicaid, Kids Can Benefit

Pima County recorded 127 remains found in Arizona deserts in 2018. When bodies are found, the group reports back to authorities. The area is then treated like a crime scene and the bodies are transferred to the Pima County Medical Examiner’s Office.

“It’s just the kind of stuff you can get at a thrift store. They’re just trying to make it.” Migala said.

The group consists of a few dozen regular volunteers. One of them is James Holeman of Flagstaff, one of two volunteers who live in Arizona. He has volunteered with Aguilas del Desierto since 2018, the year he closed McGaughs Flagstaff, the craft beer store he owned. He and his wife now are renovating properties and offering vacation rentals on Airbnb.

Asked why he volunteers to search for missing migrants, he replied it’s something he doesn’t think twice about doing.

“Why wouldn’t you want to join a group like this? I don’t understand why half of Phoenix isn’t down here. This is our backyard, for Christ’s sake,” Holeman said.

While searching the desert, Holeman wears a neon-green shirt, good hiking boots, Carhartt pants, snakebite ankle guards and a hat to block the sun. He also has his trusty Black Diamond Trekking Poles to help support his “not super-great” knees.

He is proud of the work Aguilas del Desierto does to help migrants.

“I think it’s a damn shame that we turn a blind eye to them and criminalize humanitarian aid,” Holeman said.

Campos said that, for now, Aguilas del Desierto has been able to maintain a good relationship with such federal agencies as U.S. Customs and Border Protection.

“We let them know where we are going to be and they tell us they will give us back up if it is needed.”

Sometimes the group also has backup from cadaver dogs. During February’s search, Aguilas del Desierto was joined by six canine teams. One of them was made up of Kathy Albrecht and her 3-year-old German shepherd mix, Mesa.

Albrecht and Mesa, who are from El Dorado County in northern California, have been volunteering to search for bodies for about a year and a half. Before joining Aguilas del Desierto, the pair helped in search efforts after the Camp Fire killed more than 80 people and leveled the town of Paradise, California, in November.

“I think it’s important to contribute to your community and help others,” Albrecht said, explaining why she made the drive to Arizona to assist.

Albrecht is a plant broker during her day job, helping contractors find specific plants for their businesses. She chuckled when asked about the paradoxical nature of her life as both a plant broker and working on a cadaver search team.

“It’s not like I have to be at an office from 9 to 5 downtown or something, so I can head out later in the afternoon with Mesa,” she said.

When she detects a cadaver scent, Mesa is trained to approach Albrecht and sit. Albrecht then asks the dog to show her where the scent is located. That never happened during February’s search. The group did not find any remains during the two searches that Cronkite News joined in January and February.

It’s a crapshoot each time. Migala said Aguilas found eight bodies in one search back in December.

“It’s really sad and tragic how we demonize these people coming across the border, because all they’re trying to do is either get back to family or get back to a job they had for years” Migala said.

However, the Trump administration has made it clear it intends to close what it calls loopholes in the current immigration system.

In an Oval Office statement in March, President Donald Trump doubled down on his belief that an “invasion” of migrants will eventually rush the U.S. southern border.

“People hate the word “invasion,” but that’s what it is. It’s an invasion of drugs and criminals and people. We have no idea who they are, but we capture them because border security is so good,” he said.

“All the time that I’ve spent out here, all the months, we’ve never come across anybody like that. Never a criminal, never a bad guy, never drug traffickers,” Migala said.

“Is it because they’re brown people? If people were dying in the same numbers coming over from Canada, would we treat it differently? Hell yeah, we would,” Holeman said.